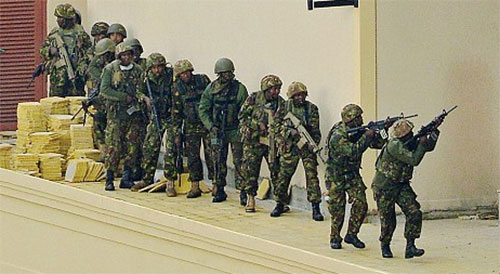 Kenya’s president said on Tuesday that his forces had “defeated” Islamists from Somalia’s Al Shabaab, had shot five of them dead and detained 11 others suspected of killing 67 people after storming a Nairobi shopping mall.

It remained unclear after Uhuru Kenyatta addressed the nation on television whether the four-day security operation at the upmarket Westgate centre was completely over, or whether any militants were still at large or hostages unaccounted for.

“We have ashamed and defeated our attackers,” Kenyatta said, adding that bodies were still trapped under rubble following the collapse of part of the building late in the operation. A fire began on Monday which officials said was started by the gunmen.

Sixty-one civilians and six security personnel had been confirmed killed in the four days of bloodshed, Kenyatta said.

Five of the attackers were shot dead and 11 suspects were in custody: “Kenya has stared down evil and triumphed,” he said.

The president added that he could not confirm intelligence reports that a British woman and two or three Americans might be involved. Forensic scientists were involved in trying to identify the nationalities of the “terrorists”, he said.

“Towards the tail end of the operation, three floors of the Westgate mall collapsed and there are several bodies trapped in the rubble including the terrorists,” he added. The death toll had previously been put by officials at 62.

“These cowards will meet justice as will their accomplices and patrons, wherever they are,” said the president, who thanked other leaders for support and used his address to both praise the response of the Kenyan people and call for national unity, six months after his election was marked by ethnic tensions.