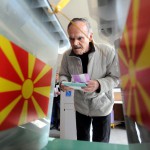 The pre-election silence for Macedonia’s first round of presidential elections began on Friday at midnight and lasts until Sunday’s vote.

Campaigning for the presidential election has halted in Macedonia ahead of Sunday, when more than 1.7 million registered voters will choose between four candidates.

Voters will choose between incumbent President Gjorge Ivanov who is running for a second five-year term for the ruling VMRO DPMNE party and three other hopefuls.

Iljaz Halimi, candidate of the opposition Democratic Party of Albanians, DPA, as well as Zoran Popovski, running for the new opposition party, Civil Option for Macedonia, GROM, are also running for office.

A second round, involving the two best-ranked candidates, takes place on April 27, alongside snap general elections.

Authorities say that all is set for the voting on Sunday.

The State Electoral Commission said it had started distributing the election materials to the 3,480 polling stations. The police aim to engage some 7,000 officers on election day, to guarantee safety.

For their part, domestic and international observers will field over 3,000 election monitors for the first round of voting.

During the campaign, observers noted that three of the four presidential candidates started their campaigns prematurely.

OSCE monitors said Ivanov visited some 70 villages and published a report on his achievements before the race had begun.

The campaign saw one televised debate, staged by Macedonian Television. Ivanov refused to appear at other debates organized by independent organizations and media, however.

The economy, over which the President has little say, as well as issues of democracy, the rule of law, and the long-standing dispute with Greece over Macedonia’s name, dominated the election campaign.

According to the constitution, the President is significantly less powerful than the Prime Minister. The President is the supreme commander of the armed forces and, together with the Foreign Ministry, shares responsibility for foreign policy, having the final say on appointments of ambassadors.

In domestic affairs, the presidential role is largely ceremonial. However, the President has the power to block bills that parliament has passed, by refusing to sign them.

One stain on the presidential race has been the insistence of the DUI, the junior party in government, that it will dispute the legitimacy of the next President, whoever his is.

The ethnic Albanian party had wanted the country’s main Albanian and Macedonian parties in parliament to agree on a presidential candidate in advance.

The party has since urged ethnic Albanians who make a quarter of the population to abstain from voting in the presidential race.