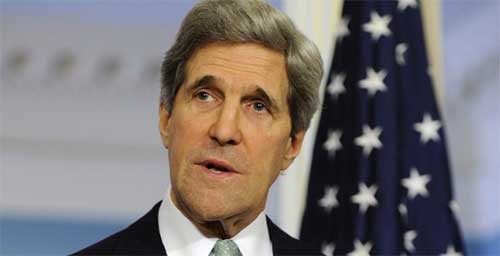 Secretary of State John Kerry said on Wednesday that neither the United States nor the rest of the world will stand by and watch the Islamic State militant group spread its evil.

Kerry was in Baghdad to meet with Iraq’s new leaders and pledge US support for eliminating the extremist group and the threat it poses.

He said President Barack Obama would later outline on Wednesday in specific detail what steps the US is prepared to take to defeat the Islamic State (ISIS), which has overrun parts of northern Iraq and Syria.

Kerry did not reveal Obama’s plans. But he predicted a coalition of at least 40 nations ultimately will eliminate the Islamic State and said Obama will “lay out with great specificity a broad strategy” to deal with the Islamic State group.

With a new Iraqi government finally in place and a growing Mideast consensus on defeating insurgent threats, Kerry pressed Iraq’s Shiite leader to quickly deliver more power to wary Sunnis – or jeopardise any hope of defeating the Islamic State group.