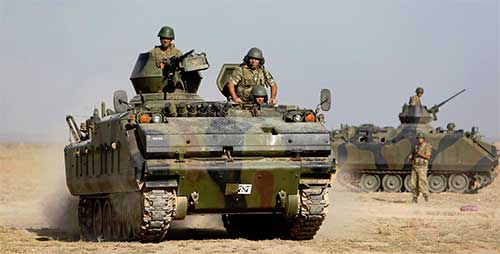 Islamic State fighters seized control of a third of the key Syrian border town of Kobane today, as Turkey rejected sending in troops on its own against the jihadists.

IS militants advanced in the strategic town overnight despite intensified US air strikes, as calls grew for ground action to support Kobane’s beleaguered Kurdish defenders.

But after talks with NATO chief Jens Stoltenberg, Turkish Foreign Minister Mevlut Cavusoglu said Ankara could not be expected to act alone. “It’s not realistic to expect that Turkey will lead a ground operation on its own,” he said.

Kobane, whose Kurdish defenders have been holding out against a three-week siege by the jihadists, has become a crucial battleground and symbol of resistance to IS.

The coalition carried out two fresh strikes early today, an AFP reporter across the border in Turkey said, as it continued a flurry of bombing raids on IS positions in and around the town.

Nearly 20 coalition bombing raids have hit near Kobane since Tuesday, but Washington has said air strikes alone would not be enough to save it.

Turkey has come under fire for its inaction as the jihadists advance on its doorstep, with protests in Kurdish areas sparking clashes that claimed at least 22 lives and forced authorities to declare a curfew in six provinces.
Fierce street battles have been raging in Kobane since the jihadists breached its defences earlier this week.

IS fighters pulled out of some areas on yesterday but have since renewed their offensive and seized more ground, a monitoring group said. “Despite fierce resistance from the Kurdish forces, IS advanced during the night and controls more than a third of Kobane,” Rami Abdel Rahman, director of the Syrian Observatory for Human Rights, said.

Post Views: 355
Previous France backs buffer-zone between Syria and Turkey
Next US worried about Turkey, Kurd tensions amid Kobani