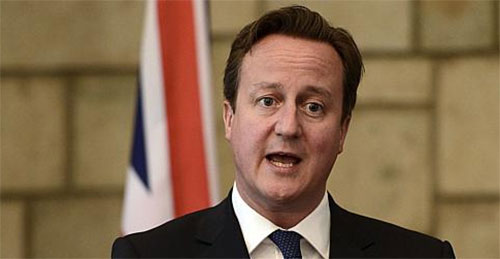 British Prime Minister David Cameron will travel to Turkey on Dec. 9 to meet President Recep Tayyip Erdoğan to discuss how to stop Britons crossing into Syria and Iraq to join Islamic State in Iraq and the Levant (ISIL) fighters via the Turkish border, his spokesman said.

The visit comes after Britain said last month it was facing its greatest ever national security threat, in part because of the risk that Britons who return from fighting with ISIL could launch attacks on home soil.

“The focus, particularly given current events in Syria and Iraq and in that region, will be CT [counter terrorism] and ISIL,” Cameron’s official spokesman told reporters on Dec. 8

Many of the around 500 Britons who the authorities believe have traveled to the region have used Turkey as a transit destination. Around half that number are already believed to have returned to Britain.

“Certainly people traveling overseas from the UK to take part in terror activity is very much part of that relationship we have with (Turkey),” Cameron’s spokesman said.

Post Views: 120
Previous NATO ceremonially end combat mission in Afghan after 13 years
Next EU to push for Turkey’s support in fight against IS