NATO to boost defence in Eastern Europe, over Ukraine situation 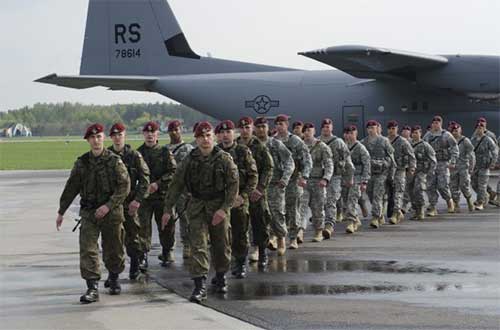 NATO was set Thursday to agree a major boost to its defences in eastern Europe including six bases and a spearhead force of 5,000 troops in response to what it called Russian aggression in Ukraine.
Secretary General Jens Stoltenberg insisted that the moves likely to be approved by defence ministers meeting in Brussels were purely defensive.
With Eastern European states concerned by the worst tensions with Russia since the Cold War, the bases will be in the alliance’s three Baltic states – Estonia, Latvia and Lithuania – plus Poland, Romania and Bulgaria.
“This is something we do as a response to the aggressive actions we have seen from Russia, violating international law and annexing Crimea,” Stoltenberg told reporters as he arrived at the 28-nation group’s headquarters.
“It is a response to what we are seeing from Russia over a period of time, and it is in full accordance with our international obligations,” the former Norwegian prime minister said.
As the ministers met, US Secretary of State John Kerry arrived in Ukraine for talks expected to touch on Kiev’s hopes that the Washington will supply weapons.
NATO leaders agreed to step up the alliance’s eastern defences at a summit in Wales in September, amid concerns about Russia’s actions in Ukraine and an increase in Russian military activity on NATO’s borders.
Stoltenberg said the NATO measures were also motivated by new threats from militants in North Africa and the Middle East who are fuelling violence within Europe.
The NATO defence ministers are expected to agree on a so-called “spearhead” force of around 5,000 troops, which will be able to deploy anywhere within a “few days,” Stoltenberg said.
They are also to finalise the list of the countries taking part in the force, which a NATO official said would hopefully be operational by 2016.
The ministers will further increase a wider NATO response force, which would take weeks or months to deploy in a crisis, from 13,000 to 30,000 troops, he said.
NATO will also decide on six “command and control” units in Eastern European nations to ensure that the new force could hit the ground running.