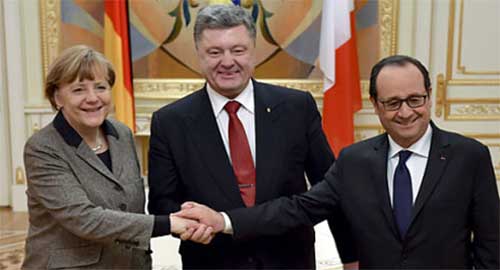 German Chancellor Angela Merkel and French President Francois Hollande head to Moscow on Friday to secure President Vladimir Putin´s support for a peace plan to end surging separatist violence in the east.
Ukrainian President Petro Poroshenko said talks with Merkel and Hollande late Thursday raised “hope for a ceasefire” after the duo jetted in to Kiev in the biggest push yet to resolve the ten-month conflict.
Russian President Vladimir Putin and the leaders of France and Germany have begun talks on a new proposal for ending the fighting in eastern Ukraine.
German Chancellor Angela Merkel and French President Francois Hollande brought a proposal to Moscow on Friday a day after discussing it with Ukrainian President Petro Poroshenko in Kiev.
The contents of the proposal have not been revealed.
Putin’s spokesman Dmitry Peskov said in a statement the talks are taking place “eye to eye” between the three leaders without other members of their delegations.
The frantic high-level diplomacy to end the worst East-West crisis since the end of the Cold War came as US Secretary of State John Kerry also visited Kiev on Thursday and Washington mulled whether to supply arms to the Ukraine army.
“President Putin can make the choices that could end this war,” Kerry said, voicing support for the “helpful” Franco-German plan to be put to the Russian leader on Friday.
As pressure grows for a peaceful resolution to the conflict that has killed over 5,300 people, rebel and Ukranian forces on the ground agreed a ceasefire for several hours Friday around the battleground town of Debaltseve to allow civilians to leave, both sides said.