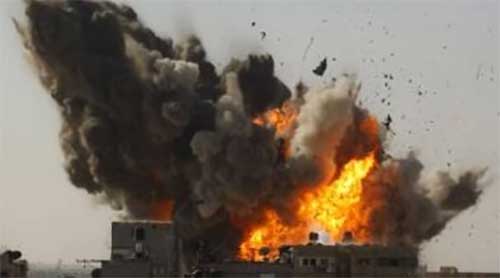 Seven civilians were killed when Egyptian jets attacked suspected Islamist militant targets in the eastern Libyan city of Derna last week, Amnesty International said on Monday, citing eyewitnesses.
Egypt had flown air strikes last Monday against Islamic State targets, a day after the militant group released a video showing the beheading of a group of Egyptian Christians.
On Sunday, Egypt’s President Abdel Fattah al-Sisi said the air force had hit 13 targets selected after a careful study and reconnaissance “with precision” to avoid civilian casualties.
But London-based Amnesty said in a report “new eyewitness testimonies… indicate that the Egyptian Air Force failed to take the necessary precautions in carrying out an attack which killed seven civilians in a residential neighbourhood in the Libyan city of Derna on 16 February.”

“Egypt has now joined the ranks of those placing civilians at risk in Libya,” said Hassiba Hadj Sahraoui, Middle East and North Africa Deputy Director at Amnesty International. “The killing of seven civilians, six of them in their own homes, must be investigated, as it appears to have been disproportionate.”

Amnesty said Egyptian jets had mostly hit military targets in Derna but witnesses had said that two missiles had struck densely populated residential areas near the city’s university.
“One missile struck a four-storey house belonging to the al-Kharshoufi family, killing a mother and her three children aged between three and eight, and injuring their father and another child,” Amnesty said. “A second missile hit a street in between civilian houses, causing three other deaths.”