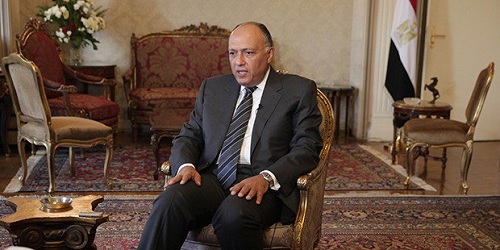 CAIRO: Libya is at “important crossroads” related to the United Nations draft agreement on Libya and its amendments, MENA reported Egyptian Foreign Minister Sameh Shoukry as saying Sunday in Algeria.
Shoukry arrived in Algerian Sunday in a two-day visit for consultations on the Libya situation with his Italian counterpart Paolo Gentiloni and Algerian Minister for Maghreb, African and Arab League affairs Abdul-Qader Msahel.
The agreement drafted by Bernardino León, head of the United Nations Support Mission in Libya, has been discussed for amendments in meetings in Cairo and Alexandria between Libyan President Akila Saleh and other Libya and international parties, Shoukry said, adding that this is a sign that Libya is before crossroads.
The tripartite meeting, which was also conducted in June, is not only to evaluate the situation, but to also set a future vision in case the Libya parliament adopted the agreement and decided to support a potential government of national unity to restore stability in the oil-rich country.
A high-level coordination between Egypt and Algeria is ongoing, Shoukry said, adding that several proposals to resolve the crisis in Libya were presented during his recent talks with León.