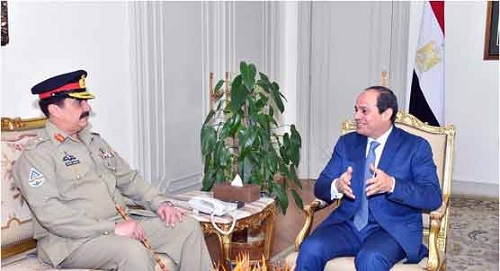 Chief of Army Staff (COAS) General Raheel Sharif met Egyptian President Abdel Fattah al-Sisi in Egypt and discussed the emerging security challenges, an Inter-Services Public Relations (ISPR) statement said on Tuesday.
“The COAS met with Egyptian president. Regional security and prevalent/emerging security challenges discussed,” DG ISPR Lieutenant-General Asim Bajwa said in a tweet.
Egyptian president stated that the Muslim Ummah needs to counter the menace of terrorism through unity, the ISPR said.
During his visit to Egypt, Gen Raheel attended training drills of the Egyptian Special Forces and appreciated their skills and capabilities.
According to ISPR, the army chief met with the military leaders of Egypt who expressed the desire to benefit from the experience of the Pakistan Army regarding the battle against terrorism. The COAS was given a guard of honour at the headquarters of the Egyptian Army.
President Sisi acknowledged Pakistan Army’s “successes in fighting terrorism” and its efforts for attaining “regional stability”.
“The COAS emphasised need for the world and Muslim Ummah to unite in fighting the menace of terrorism,” Bajwa said.
General Raheel also met Sheikhul Azhar Ahmed El-Tayeb in Al-Azhar University, who praised Pakistan Army’s efforts in eliminating terrorism