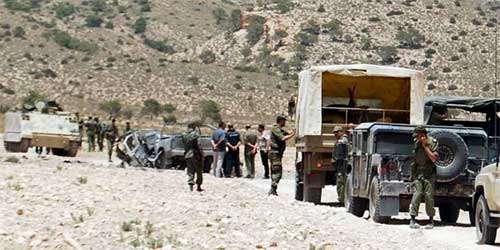 The Tunisian army killed two suspected militants on Wednesday in the north-west of the country, the Ministry of Defence said on Thursday.
“Military units, reinforced by elements of the National Guard killed two terrorists during search operations” near the town of Jendouba, the ministry said in a statement.
A soldier was wounded during the fighting, it said.
Two rifles were also seized, along with ammunition, backpacks, clothes, mobile phones and cash.
It said the army and the National Guard would continue to search for militants in the region.
Tunisia saw an uptick in militant violence following its revolution in 2011, and security forces frequently clash with extremist groups in the mountainous west of the country.
The militants have responded by launching ever more ambitious attacks.
In March 2015, militant gunmen killed 21 tourists and a policeman at the National Bardo Museum in Tunis.
The following month, 30 Britons were among 38 foreign holidaymakers killed in a gun and grenade attack on a beach resort near the Tunisian city of Sousse.
Both attacks were claimed by the Daesh group.
Tunisia has been in a state of emergency since Nov.24, when a suicide bombing, also claimed by Daesh, killed 12 presidential guards in central Tunis.
Several thousand Tunisians have joined extremist groups including the Daesh group in Syria, Iraq and neighbouring Libya.