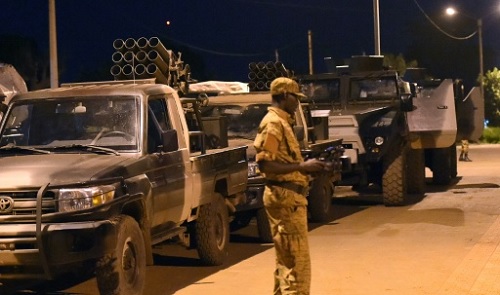 Renewed fighting pitted former Mali rebels against pro-government fighters for a second day on Wednesday, while the army separately found the bodies of five missing soldiers, the UN said.
Fighting erupted on Tuesday near the restive northeastern town of Kidal between ex-rebels from the Coordination of Azawad Movements (CMA) and members of the pro-government group GATIA.
Calm returned overnight, but “resumed this morning,” said an official with the Imghad and Allies Tuareg Self-Defence Group (GATIA).
The two sides had clashed with heavy arms in Kidal itself on July 21-22, and again on July 30 around 40km to the east of the town, several sources said.
Nobody from the CMA was immediately available to comment on the latest reported fighting, and there were no details on casualties.
The clashes were confirmed by a source in MINUSMA, the UN peacekeeping mission in the west African country, which helps maintain calm in Kidal.
“We have information on fighting” underway near Kidal, said the source, giving no further details.
Meanwhile Mali’s army said it had recovered the bodies of five soldiers missing since an attack on Monday in the Mopti region in the centre of the country.
Four bodies were found on Tuesday and a fifth on Wednesday morning, said an army spokesperson.
“At this stage we cannot specify the cause of death. Our experts are still examining the remains,” he said.
Another military official said overnight that the four bodies had been washed up by the river, and a probe was launched to determine “if they were killed and thrown into the river or if they died by drowning”.