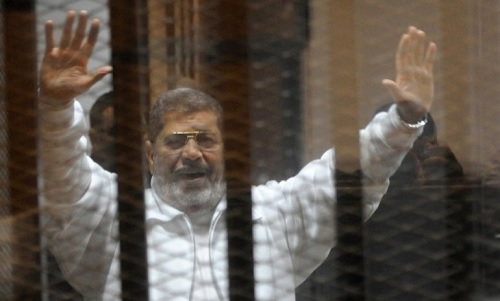 An Egyptian appeals court has upheld a 20-year sentence for the deposed president Mohamed Morsi.
Saturday’s ruling is the first final verdict against Morsi on charges arising from the killing of protesters during anti-government demonstrations in 2012.
London-based Amnesty International has denounced the initial trial as a “travesty of justice”.
The Court of Cassation also upheld sentences against eight of his co-defendants, including seven who received the same prison term, and one sentenced to 10 years in prison, a judicial official said.
Morsi was convicted in April 2015 of involvement in deadly clashes outside the presidential palace during his one year in power.
His supporters and protesters had clashed after he issued a decree that placed his decisions beyond judicial review, sparking anger that culminated in mass protests against him in June and July 2013.
The military deposed him on July 3 that year, and he has faced several trials since.
Morsi was overthrown by then-army chief and now President Abdel Fattah el-Sisi following the street demonstrations.
Morsi – Egypt’s first democratically elected president – faces charges in other cases, including allegedly leaking secrets to Qatar, conspiring with Hamas – the Palestinian rulers of Gaza – to destabilise Egypt, and organising a jailbreak during the 2011 uprising against then-president Hosni Mubarak.