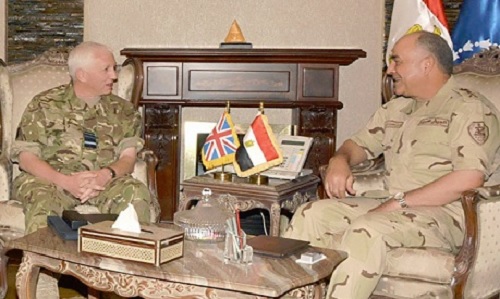 The Egyptian army’s chief of staff, Lt. Gen. Mahmoud Hegazi, met in Cairo on Monday with the UK’s chief of defence intelligence, Air Marshall Philip Osborn, for talks on a wide range of issues, including regional security.
Among the key topics under discussion was developments in the MENA region that impact negatively on regional and global security and stability.
In an official statement from the Egyptian armed forces, army spokesman Tamer El-Refai said the meeting covered ways of supporting military cooperation between the armed forces of Egypt and the UK, seeking to enhance the exchange of views and information in various areas.
The talks were attended by several officials from the Egyptian military, as well as the British ambassador to Cairo John Casson.