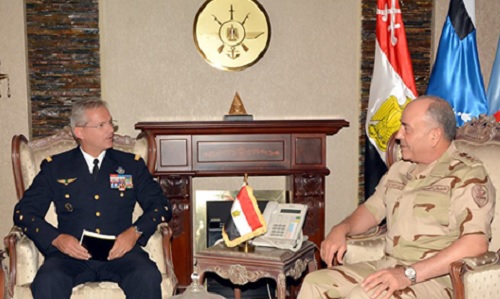 Egypt’s army chief-of-staff Mahmoud Hegazy discussed military cooperation on Wednesday with NATO’s Supreme Allied Commander for Transformation General Denis Mercier in Cairo, the Egyptian military said in a statement.
The talks addressed means of boosting military ties between the Egyptian military and NATO on the back of recent developments and challenges facing the Middle East and North Africa.
Egypt is looking forward to “more military coordination, cooperation and exchange of information and expertise between [its] armed forces and NATO,” the statement added.
Wednesday’s meeting was attended by a NATO delegation accompanying Mercier as well as a number of senior Egyptian army officials.