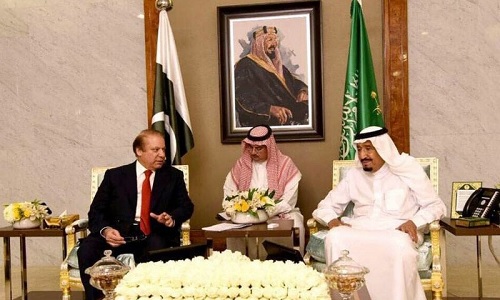 Pakistan Prime Minister Nawaz Sharif and Chief of Army Staff (COAS) Gen Qamar Bajwa on Monday met with Saudi King Salman bin Abdul Aziz in the backdrop of a deepening diplomatic rift in the Middle East, Radio Pakistan reported.
The PM ─ accompanied by General Bajwa, Finance Minister Ishaq Dar and Adviser to the PM on Foreign Affairs Sartaj Aziz ─ were greeted by the Saudi monarch at the Jeddah Royal Palace.
The delegation was expected to hold talks with Saudi leadership centred on deteriorating relations between Gulf nations after Saudi Arabia, Bahrain, Egypt and the United Arab Emirates cut ties with Qatar, accusing it of supporting terrorism.
In its initial response to the Middle East crisis, Pakistan had stressed the need for unity in the Muslim world and urged the countries involved to engage in dialogue.