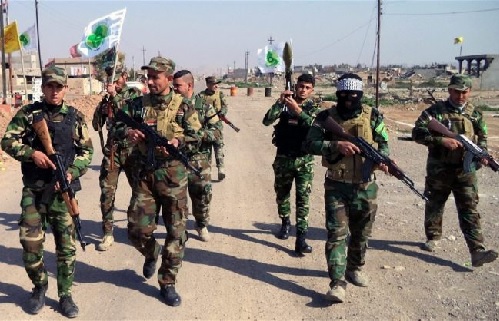 Three senior Islamic State leaders were killed in Tal Afar town, west of Mosul, the Shia-led paramilitary troops said on Friday.
A statement by Saraya al-Jihad militia, affiliated to al-Hashd al-Shaabi (Popular Mobilization Units) said troops “identified the bodies of IS members, who were killed on Thursday while infiltrating behind the troops in Tal al-Zalat region, west of Mosul.”
The militants included “Abu Iman, in charge of Islamic police, Abu Abd Zu’aizei’a, in charge of recruitment, and Naser abdullah Khedr al-Badrany,” the statement said. “They were in charge of planning to attack the PMUs from the back.”
Despite declaring victory over IS, the group have reportedly carried out attacks against security forces over the past few days.
Earlier this month, Iraqi Prime Minister Haider al-Abadi congratulated Iraqi forces and citizens on the victory over IS militants who had held the second largest Iraqi city since 2014. More than 25000 militants were killed throughout the campaign.
The town of Tal Afar and few surrounding areas are still held by the group in Nineveh province.