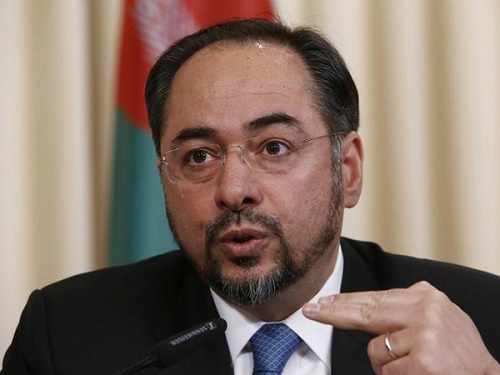 Afghanistan Foreign Minister Salahuddin Rabbani will visit India next week.
During his visit, he will call on Indian Prime Minister Narendra Modi and will also hold bilateral talks with External Affairs Minister Sushma Swaraj.
The visit comes weeks after US President Donald Trump announced a new policy on Afghanistan and sought sought more help from India in Afghanistan.
Speaking from the Fort Myer military base in Arlington Trump had said, “We will develop a deeper strategic partnership with India, but we want them to help us more in Afghanistan.”
“Another part of South Asia strategy for America to further develop its strategic partnership with India, the world’s largest democracy and key security and economic partner of US. We appreciate India’s important contribution to bring stability in Afghanistan. But, India makes billions of dollars in trade with the United States and we want them to help us more with Afghanistan especially in the area of economic consistence and development,” Trump said.
Afghanistan’s Ambassador to India Shaida Mohammad Abdali hailed United States President Donald Trump’s new policy for Afghanistan and urged Pakistan to join the fight against terrorism sincerely to sustain peace in the region.
“President Trump’s remarks were very clear. It has still open the window for cooperation and partnership, but clearly the lack of that…he also hinted at a strong action. I think this is an opportunity for everyone, including Pakistan to adhere to the principles of state government, to fight terrorism sincerely, for the sake of everyone in the region,” Ambassador Abdali said.
“If there is genuine fight against terrorism for peace and stability, there is still an opportunity for partnership, but if that’s not there, the words were clear and we hope that words are also transferred into action, and if there is lack of sincerity in the fight against terrorism, action will be as it was spoken in his (Donald Trump) remarks,” he added.
Describing Trump’s policy as a very comprehensive strategy, the envoy said it focused more on terrorism and it is very multifaceted.