US Coalition drived out IS from 95% of former lands 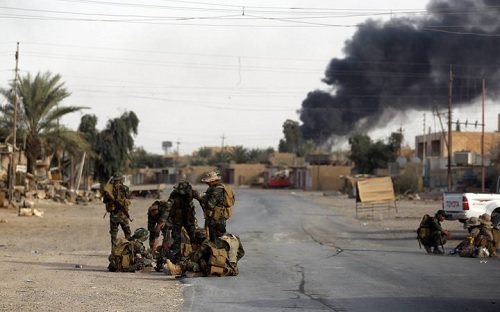 Syria’s army announced it had taken Deir al-Zour early on Friday. IS had held most of Deir al-Zour since 2014, important because of its proximity to the border with Iraq.
While the Syrian army said it had been re-captured, other reports said government forces and their allies were clearing the last pockets of resistance from IS in the city.
Later in the day, Iraq Prime Minister Haider al-Abadi said al-Qa’im, near the Syrian border, had been recaptured by government forces.
Al-Qaim was the last sizeable territory held by IS in Iraq. The operation to retake the city and the surrounding area was launched last week. Soldiers, police, Sunni tribesmen and mostly Shia paramilitary fighters, some backed by Iran, took part in the assault.
The town was taken “in record time”, Mr al-Abadi said.
Iraqi forces said they had also seized the last border post between Iraq and Syria that was held by IS.
The US-led coalition said IS had now been driven out of about 95 percent of the land the group once held in Iraq, and more than 4.4 million Iraqis had been freed from its rule.