Several events that took place at the end of 2017 and the beginning of this year brought to the attention the complex situation in the West Bank and the still not solved Palestinian problem. Some of these developments indicate a significant shift in the approach of the issue by the United States of America, until now the main power actor in the endless “peace process” in the region.
The West Bank in brief
The West Bank is a landlocked territory near the Mediterranean coast of Western Asia, most of it under Israeli control or under joint control of Israel and the Palestinian Authority (PA). The final status of the entire area is yet to be determined. The West Bank, including East Jerusalem, has a land area of 5,640 km2 plus a water area of 220 km2, consisting of the northwest part of the Dead Sea. The West Bank has an estimated population of 2,785,366 Palestinians and approximately 371,000 Israeli settlers, with approximately another 212,000 Jewish Israelis in East Jerusalem. 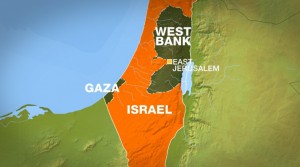 From 1517 through 1917, the area was part of the Ottoman Empire, included in the provinces of Syria. At the end of World War I, the winning powers allocated the region to the British Mandate of Palestine (1920-1947). In 1947, it was designated as part of a proposed Arab state by the United Nations’ partition plan for Palestine which was to replace the British Mandate with a Jewish State, an Arab State and an internationally administered enclave of Jerusalem. However, following the 1948 Arab-Israeli war, the West Bank was captured by Transjordan (renamed Jordan two years after independence in 1946). The region was named then “West Bank” or “Cisjordan”, while “East Bank” or “Transjordan” designated the area east of the river. Jordan ruled over the West Bank from 1948 until 1967, when the West Bank and East Jerusalem were captured by Israel as a result of the Six Day War. With the exception of East Jerusalem and the former Israeli-Jordanian no man’s land, the West Bank was not annexed by Israel but came under Israeli military control until 1982. In 1982, as a result of the Israeli-Egyptian peace treaty, the direct military rule was transformed into a semi-civil authority, but the Israeli settlements were administered directly by Israel, under the name of “Judea and Samaria.”
Since the 1993 Oslo Accords, the Palestinian Authority (PA) officially controls a geographically non-contiguous territory comprising approx. 11% of the West Bank (known as Area A) which remains subject to Israeli incursions. Area B (approx. 28%) is subject to joint Israeli-Palestinian military and Palestinian civil control. 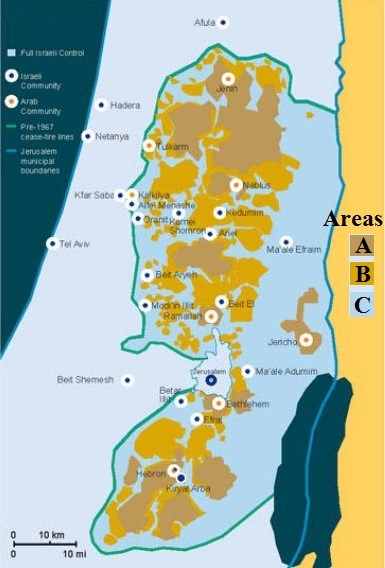 
[1] A Jewish state and a Palestinian State recognizing each other.
[2] Named after a U.S. citizen who died during a terrorist attack in Israel.

[3] Television talk shows play a formative role in shaping public debate in Egypt, and Egyptian intelligence services often brief the presenters of the programs about messages to convey to the public.
[4] The resolution was drafted by Egypt and declared any decisions aimed at altering the status of Jerusalem null and void, calling for them to be rescinded. The document was approved by 14 UNSC members, with the US being the only member to veto it.
[5] The recent book “Fire and Fury”, chronicling U.S. President Donald Trump’s rise to power and first year in office mentioned that Steve Bannon, Trump’s former chief political adviser, was pushing to move the American Embassy in Israel from Tel Aviv to Jerusalem on Trump’s first day in office. He also wanted to finally kill the two-state solution by announcing that Jordan will take back the West Bank and Egypt will assume control over the Gaza Strip. In the book’s first chapter, he is quoted telling Roger Ailes, former head of Fox News about this plan.