Xi told Hong Kong chief executive Carrie Lam that the “patriots ruling Hong Kong” was a fundamental part of Beijing’s policy towards the city, adding that it affected national sovereignty and security.

“The central government’s comprehensive jurisdiction over the Special Administrative Region can only be achieved if patriots rule Hong Kong,” state news agency Xinhua quoted Xi as telling Lam during a duty trip to Beijing.

He said this would resolve “deep-seated problems” in Hong Kong, in an apparent reference to the political opposition.

Since China imposed draconian national security legislation on the city from July 1, 2020, authorities in Hong Kong have been cracking down on peaceful dissent, expelling pro-democracy lawmakers who protested in the Legislative Council (LegCo) and arresting people for subversion, secession, sedition and collusion with foreign powers over social media posts.

Xi’s comments came as the city’s government confirmed that members of the District Council, which saw a landslide victory for pro-democracy parties in November 2019, will be required to swear oaths of allegiance.

Claims that oaths of allegiance weren’t honored have been used to strip several elected LegCo members of their seats, eventually prompting the mass resignation of the entire opposition camp in December 2020 in protest.

District councilors have told RFA that the administration has been doing everything in its power to undermine the councils since the last election, to the extent of denying funding and setting up ‘shadow’ councils staffed with Beijing’s supporters.’A political struggle’

Southern District Council chairman Lo Kin-hei, who also leads the Democratic Party, said the authorities have succeeded in neutralizing LegCo, and have now turned their attention to the District Council, as a last bastion of political opposition in the city.

“This is a political struggle,” Lo told RFA. “LegCo can no longer fight, so the fight has moved to the District Council.”

“The trouble is that the district councils weren’t designed for political struggle, but to reflect the opinions of local communities and to take care of people’s livelihoods,” he said.

Hong Kong political commentator To Yiu-ming said the CCP will have total control over who is considered a “patriot.”

“This means they can remove democrats or dissidents from LegCo or the District Council just by labeling them unpatriotic,” To told RFA. “There will be more disqualifications.”‘Social work’ department

Meanwhile, a report on the HK01 news website said Beijing’s Central Liaison Office in Hong Kong would step up its direct involvement in the daily life of the city with the establishment of a “social work” department.

“This has been happening since the beginning of this year, via personnel changes, since Luo Huining took over [as head of the office],” To said. “It has now become much clearer what the agenda is.”

“They will be taking a much larger role in decision-making in Hong Kong in future, and specifically intervene in community business, like a party committee directing the work of the Hong Kong government,” he said. “They’re not even pretending that this is one country, two systems any more.”

Meanwhile, a court in West Kowloon sentenced activist Koo Sze-yiu to four months in prison on Thursday for “desecrating the national flag.”

Koo, 74, was accused of displaying a tainted national flag when he showed up outside court in July last year in support of pro-democracy activists, including media tycoon Jimmy Lai and 14 others charged with protest-related offenses, government broadcaster RTHK reported.

The court found that the flag had been marked words including “white terror” and “fascist terror,” and that Koo, who has stage four colorectal cancer, had held it upside down. 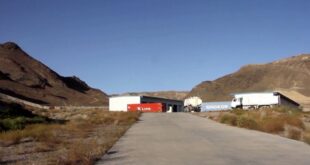