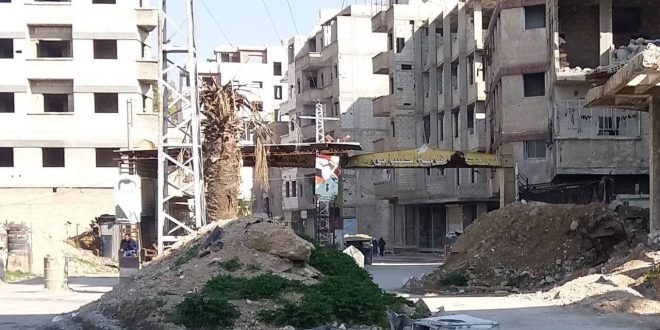 On Wednesday, the Syrian regime forces found one of their fighters killed near the village of Jisreen in eastern Ghouta, Damascus countryside.

The SY 24 correspondent in eastern Ghouta said, “the Presidential Guard, affiliated with the regime army, found the body of one of its members on the outskirts of Jisreen, next to the road leading to the town of Beit Nayim,” noting that “unknown persons had strangled him.”

The correspondent pointed out that “members of the Presidential Guard transported the dead body to a Damascus hospital, while a patrol tried to find any evidence leading to the perpetrators by searching and combing the crime scene.”

Last Saturday, the village of Al-Rihan, which is annexed to the city of Douma in eastern Ghouta, witnessed remarkable security tension after a member of the al-Rihan roundabout checkpoint, which belongs to the State Security Branch, was beaten up by unknown persons while circling the checkpoint.

Moreover, unknown people attacked one of those involved in the kidnappings and lootings that took place in southern Syria recently.

According to the SY 24 correspondent, “unidentified gunmen shot Wael Abu Salem on the road between the city of al-Harak and the town of Nahata, which led to injuring him severely. He was subsequently transferred to a hospital in Daraa.”

He stated that “Salem hails from the city of al-Harak, and had previously worked within the ranks of the Syrian opposition factions before joining a group that carries out kidnappings and theft operations with the protection of the regime’s 4th Division, after joining the settlement agreement in 2018.”

Salem took part in the settlement agreement, joined the 4th Division, and now works as part of the kidnapping and looting groups, in partnership with other gangs located in the Suweida Governorate.