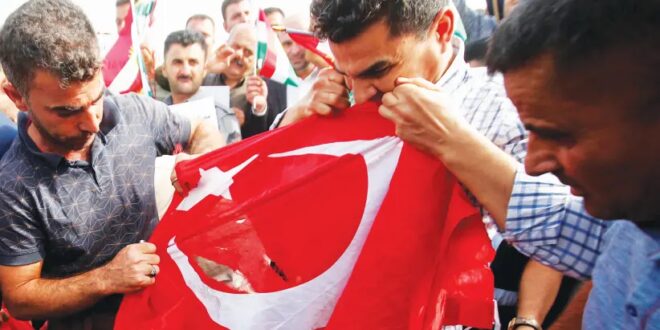 Turkish forces last week launched a renewed attack on the PKK (Kurdish Workers Party) organization in northern Iraq. This latest offensive follows the “Claw Eagle 2” operation in Gare in February, in which Ankara’s forces unsuccessfully tried to liberate 13 prisoners held by the PKK in the Dohuk area. The operation, dubbed “Claw Lightning” and “Claw Thunderbolt,” involves airdrops of commando forces into the Zap, Metina and Avashin areas.

They form part of a pattern of intensified Turkish military activity in northern Iraq over the last six months. This, in turn, is an element in a broader strategy of assertion through military force undertaken by Ankara across a wide area over the last year. Active operations in cooperation with proxy elements have been undertaken in Syria, Libya and Nagorno-Karabakh. Turkey has also established a considerable military presence in Qatar.

Turkish activities in Iraq have a relevance beyond the immediate geographical context. This is because of what they reveal regarding the nature of Turkish ambitions in the surrounding areas, and what this in turn suggests regarding Turkey’s role as an ostensible Western ally in the period ahead.

The specific issue deserving attention is whether Turkey wishes to or is able to play a role in checking the advance of Iran across Iraq and the Levant, in the direction of the Mediterranean Sea and of Israel.

Turkey’s current actions in Iraq are directed specifically against the PKK. The intention is to prevent that organization from maintaining freedom of movement for its fighters from its headquarters in the Qandil Mountains, located in the tri-border area between Iraq, Turkey and Iran, to the Iraqi-Syrian border and the 30% of Syria controlled by the Syrian Kurds. The Turkish government regards the US-allied governing authority in that area as nothing more than a front for the PKK.

Turkey fears the establishment of a large, de facto, PKK-dominated area stretching from Qandil all the way to northwest Syria. The “Claw’ operations in northern Iraq thus form part of the series of military incursions undertaken by Turkey since 2016 with the intention of dividing the area of Kurdish domination into manageable chunks.

Militarily, all these operations may be regarded as qualified successes. The Kurdish fighters lack the ability to hold the Turkish Army back in conventional operations. In addition, in the Iraqi context, the extensive Turkish use of drones has struck a severe blow to the previous main advantage enjoyed by the PKK fighters: their superior knowledge of the terrain, and consequent ability to move through it without being detected by Turkish forces.

Turkey now has a considerable commitment of its own forces in these de facto security zones in Iraq and Syria. Arzu Yilmaz, a Turkish scholar interviewed this week on Al-Monitor.com, estimated that there are around 5,000 Turkish troops deployed on Iraqi soil. The number of Turkish troops in Syria is somewhere between 12,000-20,000. They are backed up by F-16s, artillery and drones. A network of checkpoints and outposts has been established in northern Iraq. Turkish Interior Minister Suleyman Soylu said this week that the Turks intend to build a base at Metina. This will join the estimated 37 military positions established by Turkey on the soil of Iraqi Kurdistan since the “Claw” operations began.
Most of these positions cluster close to the border, while some extend as far as 40 kilometers (25 miles) into Iraq. It is noteworthy that these incursions are carried out without consultation with the Kurdistan Regional Government (KRG) of northern Iraq, whose armed forces are responsible for security on the border.

Sources in the KRG interviewed for this article said that they regard the operations as part of a Turkish effort to turn the autonomous Kurdish area in northern Iraq into a Turkish satrapy. The PKK threat, according to this view, is a useful pretext for this purpose.

SO, WHAT broader strategic lessons may be learned from the Turkish activity in these neighboring, partially fragmented Arab countries over the last years? Does the Turkish pattern of assertiveness suggest that Ankara could act as a counterweight to the ambitions of Iran in these areas?

In so far as the Turkish and Iranian projects physically impinge on one another, the result will be localized tensions. This is visible, for example (for now, it is the only real example) in the Sinjar area, on the Syrian-Iraqi border.

Turkey seeks control of this area, as part of its efforts to cut Qandil and the PKK off from Kurdish northeast Syria. Iran wants to control it too, as an entry point to Syria. There have been rumors in recent weeks of a possible major Turkish operation into the area. Such an operation remains unlikely however, because of the likely military and diplomatic ramifications. Neither Baghdad nor Tehran seriously object as long as Turkey limits its activities to the PKK and the KRG. Indeed, these two capitals share with Ankara a strategic opposition to Kurdish aspirations. Sinjar, however, would represent a step too far.

Turkey has less clearly defined ambitions in the wider Mosul area, which Turkish nationalists remember as the former Ottoman vilayet of Mosul. But here, too, the issue is wrapped up with the desire to limit Kurdish autonomy.

These local frictions notwithstanding, Turkey and Iran are not set on a collision course. For the most part, the ambitions of these countries in the relevant areas do not overlap or impinge on one another. The Iranian project further south is not a barrier to the achievement of Ankara’s aims against the Kurds. The reverse is also the case with regard to Iran’s ambitions to reach the Mediterranean and entrench its front against Israel. Turkey has of necessity abandoned the old hopes of toppling Assad and replacing him with a Sunni Islamist regime. Similarly, in Baghdad politics, the Turks are only minor players, offering limited support to a number of Sunni Arab and Turkmen politicians.

Neither Ankara nor Tehran want a strong Iraq, or a strong Syria. On the contrary, the fragmentation of these countries suits both. Both are happy to have weak neighbors whose territory can be penetrated at will. For the most part, they are interested in biting off different chunks of territory. Iran is busy creating its areas of militia control for the purpose of the transport of weapons and men toward Lebanon and Israel. It is burrowing deep into the formal state structures of both countries. Ankara has neither the desire nor the means to act as a counter to this. Its own areas of control, meanwhile, in northern Syria and Iraq, are not areas essential to this Iranian project.

Ankara also cannot act as a bulwark against Russia in these areas. On the contrary, its fiefdoms in Syria are dependent on Russian acquiescence and goodwill. Indeed, Moscow sees the affording of this goodwill as a useful way to draw Turkey further away from the west and NATO.

In many ways, the current orientations of Ankara and Tehran resemble one another. Both countries are the centers of former empires, both are governed by regimes combining political Islam with a type of imperial revanchism. Inherent in this for both countries is opposition to the declining US-led regional order, and a desire to gain from its retreat. At the present time, however, their projects are able mostly to co-exist, like parallel crescents. Anyone hoping that Ankara might be interested in the job of propping up the regional order against Iran is not looking close enough at the reality on the ground.

Post Views: 61
Previous Does the US want a nuclear deal sooner than Iran? – analysis
Next Palestinians count down to the end of Abbas’s era