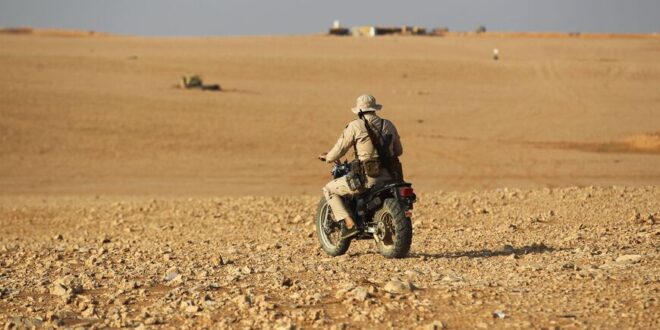 A recent incident along Iraq’s western border and alleged connections between drug smuggling and Islamic State cells in the area have raised concern.

Orders to arrest three Iraqi border guard commanders in late April after positions were abandoned and equipment and weaponry were left to alleged Islamic State (IS) attackers seemed to show seriousness on the part of the government but also fostered concern.

Though not widely reported, the incident was painfully reminiscent for some — in a vastly minor way — of the international terrorist organization’s Mosul takeover in June 2014, when Iraqi security forces abandoned their positions en masse. The weapons, tanks and equipment left were subsequently used by IS to conquer more territory.

The border police station was located at an outpost south of the city of Rutbah. Rutbah, relatively near Iraq’s borders with Syria, Jordan and Saudi Arabia, is in Iraq’s largest but sparsely populated, mostly desert province of Anbar. To the southeast is Muthanna province, which also borders Saudi Arabia.

One of the commanders arrested was said to have been in charge of an area that includes the Najaf and Muthanna region deserts and areas around Nukhayb in southern Anbar.

Interior Ministry spokesman Maj. Gen. Khaled Mhanna and other Interior Ministry officials contacted by Al-Monitor for comment had not replied to a request for further information by the time of publication of this article.

Some media reported that IS fighters burned the police station and fled after stealing communications equipment, a pickup truck and weapons.

Iraqi security forces regularly announce finding weapons stashes during operations in various parts of the province and explosions of improvised explosive devices are a relatively frequent occurrence along roads used by the security forces.

Clashes occurred between the police and IS near Rutbah along a road used by this Al-Monitor reporter to arrive at the Trebil border crossing with Jordan in late January a few hours before she went past the same spot. She was told by local security forces at that time that this happened “almost daily” and was “normal.” Trebil is to the west of Rutbah.

In a reporting trip to the Qaim district along the Iraqi-Syria border in early April, this journalist spoke with several security force members who said drug smuggling in the area south of the key border crossing of Qaim with Syria to the Saudi border with Iraq was enabling IS cells to continue operating in that area.

Some of these security forces had in the past been involved in fighting against IS in the Rutbah area, over 160 kilometers (100 miles) south of Qaim and near Trebil, and retain contact with the security forces operating in that area.

One of those Al-Monitor spoke with was a man known as Abu Aya of the Albu Mahal tribe, who is the commander of the Qaim-based Popular Mobilization Units, Kataib al-Hamza.

Abu Aya said the “wali or emir of the desert” around Rutbah to the border crossing of Waleed to Nukhayb was Shakkar Abboud, also known as Abu Khashem. Waleed is near the Syrian town of al-Tanf, where international coalition troops and Syrian opposition fighters they support are stationed just north of the Jordanian border.

Abu Aya said he believed Abboud was from the Albu Aissa tribe. Another security source from Qaim said Abboud was actually from the Aniza tribe but agreed with the description of the man as “emir of the desert” in that area.

Abboud, Abu Aya told Al-Monitor, “knows every inch of the desert and has always lived there” and said he is involved in smuggling drugs and weapons across Anbar’s borders.

“He is the one giving salaries to those fighting the Iraqi security forces,” the Kataib al-Hamza commander said, adding, “He’s the top drug dealer in the desert.” Abu Aya said narcotics are “sent to Jordan and Saudi Arabia” but “brought in from Syria and Lebanon.”

He said that there are at least 100 to 150 men answering to Abboud in that part of the Anbar desert and that local shepherds are often kidnapped for ransom by IS cells there as well.

The US-led international coalition supports a Syrian opposition force known as Maghawir al-Thawra on the Syrian side of the border at the al-Tanf garrison opposite the Waleed crossing north of Rutbah. This journalist was told in 2018 by the Maghawir al-Thawra commander, Mohannad al-Talaa, that two smugglers — an Iraqi and a Syrian — had been caught by the group with an estimated $1.4 million in narcotics in May of that year.

Many of the men in Maghawir al-Thawra are Arabs originally from Syria’s Deir ez-Zor region. The group is not connected to the coalition-supported, Kurdish-led Syrian Democratic Forces that control the part of Syrian-Iraqi border north of the Euphrates River, which enters Iraq at Qaim.

In an emailed response to questions about what support the international coalition combating IS had provided to Iraqi border forces, spokesman Col. Wayne Marotto told Al-Monitor that the United States, through the coalition’s Train and Equip Fund Program, has provided Iraqi security forces with “Rapid Aerostat Initial Deployment (RAID) towers. The towers and its accompanying accessories will provide essential situational awareness necessary for improved security and daily operations.”

Local Anbar security officials told Al-Monitor that the equipment given to Iraq to defend its border with Syria has been used mainly for areas north of Qaim. Many Iranian-linked armed groups have a presence south of Qaim on the Iraqi side, including near Rutbah, and control much of the Syrian side.

Meanwhile, an uptick has been seen in IS attacks on various security forces across Iraq during the Muslim holy month of Ramadan, which ends mid-May.