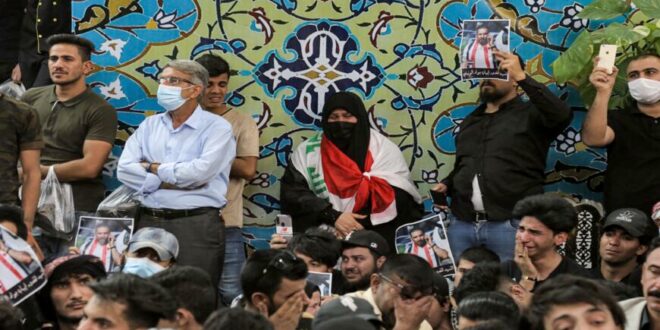 The murder of a prominent activist in Karbala has triggered protests and calls for answers.

Hundreds of protesters took to the streets in the southern Iraqi city of Karbala on Sunday, with some targeting the Iranian Consulate following the assassination of a well-known Iraqi activist by unknown gunmen.

Ehab Wazni was fatally shot overnight Sunday near his home in Karbala, a holy city in Iraq’s mainly Shiite south. According to Agence France-Presse, surveillance footage showed unidentified men on motorbikes used a gun equipped with a silencer to kill the activist.

No group has claimed responsibility for Wazni’s death, but Iran-backed militia groups have previously been linked to the deaths of Iraqi activists and journalists in the region.

The assassination sparked fresh protests in Karbala, with angry demonstrators cutting off roads with burning tires. That evening, crowds gathered outside Iran’s consulate in Karbala and set fire to parts of the exterior, according to RFE/RL. Security forces responded with live ammunition, injuring at least 10 people.

Wazni was a vocal critic of Iran’s involvement in the country. He helped lead the widespread protests that erupted in October 2019, which called for an end to Iranian influence, government corruption and a lack of basic services. Protesters tried to burn down the Iranian consulates in both Karbala and the holy city of Najaf.

Prime Minister Mustafa al-Kadhimi, who assumed the premier position last year after five months of political deadlock, has vowed justice for those killed or wounded by security forces.