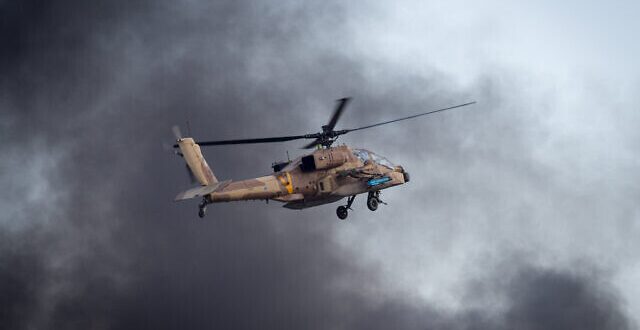 An Israeli helicopter bombed an alleged Hezbollah site on the Syrian Golan Heights, injuring one person, in a rare daytime strike on Monday, according to Syrian sources.

The Israel Defense Forces refused to comment on the matter.

Syrian state news outlet SANA said the Israeli helicopter struck a target near the town of Khader, an area known as deeply tied to Syrian dictator Bashar Assad’s regime and his allies, Iran and the Lebanese Hezbollah terror group, both of which Israel says maintain a presence on the Golan.

The man who was injured in the strike was identified in Syrian media as Tahir Mahmoud, a resident of Khader. SANA said he was a civilian, though photographs shared on social media showed him in military garb, carrying a rifle.

According to the Syrian Observatory for Human Rights, a group linked to Syria’s opposition, Mahmoud worked on behalf of Hezbollah, which maintains bases of operation near the border with Israel and has carried out and attempted a number of attacks on Israeli troops from there over the years.

Daytime strikes by Israel are highly unusual and are generally only conducted in order to prevent impending attacks.

Earlier this month, Israeli helicopters bombed targets near the city of Quneitra on the Syrian Golan border, according to Syrian media. SANA said the attack caused neither injuries nor damages. Then too, the IDF declined to comment on the reported strikes, in accordance with its policy to neither confirm nor deny most of its operations in Syria.

Also earlier this month, SANA reported that Israeli aircraft carried out major airstrikes in northern Syria that killed one person and wounded six. The report claimed the casualties were civilians. Videos posted to social media showed a large fire and several loud explosions at the scene of the blast, likely indicating that the target was a weapons cache. SANA said the site was a plastics factory. Israel has reportedly bombed sites connected to Iran’s alleged missile production and arms depots in the areas of Latakia and Hama before.

The IDF has launched hundreds of strikes in Syria since the start of the civil war in 2011 against moves by Iran to establish a permanent military presence in the country, as well as efforts to transport advanced, game-changing weapons to terrorist groups in the region, principally Hezbollah.