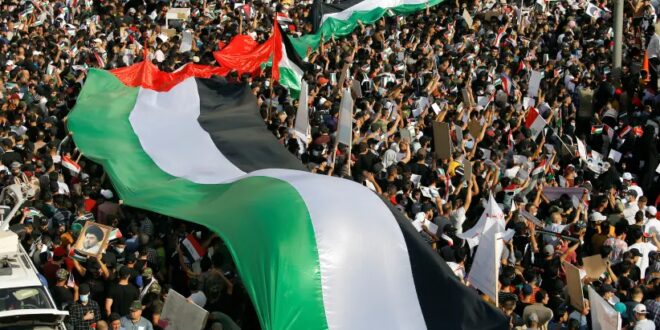 Chanting crowds gathered in several Iraqi cities on Saturday, some burning Israeli and American flags, in protest against the Israeli bombardment of the Gaza Strip.

The rallies, called by powerful Shi’ite cleric Moqtada al-Sadr and other paramilitary leaders, were held as Israel launched more air strikes on Gaza and Palestinian militants fired rockets on Tel Aviv and other cities in the worst escalation in the region since 2014.

Sadr, who has millions of followers in Iraq and controls a large paramilitary group, pledged his support to Palestinian armed groups in Gaza.

Mass public gatherings have been rare in Iraq since security forces and militia groups crushed anti-government protests last year and amid regular curfews to combat the spread of COVID-19.

The government had announced a 10-day curfew over the Muslim Eid holiday in response to rising coronavirus infections. The curfew was partially lifted the day before the anti-Israel demonstrations.

Political leaders aligned to Iran-backed militias joined the call for Iraqis to take to the streets in a rare show of unity by rival Shi’ite Muslim factions which are competing for power ahead of a general election slated for October.

Sadr and the Iran-backed groups see Israel and the United States as enemies and vehemently oppose the possibility of restoring diplomatic links with Israel as two Gulf Arab states have done.