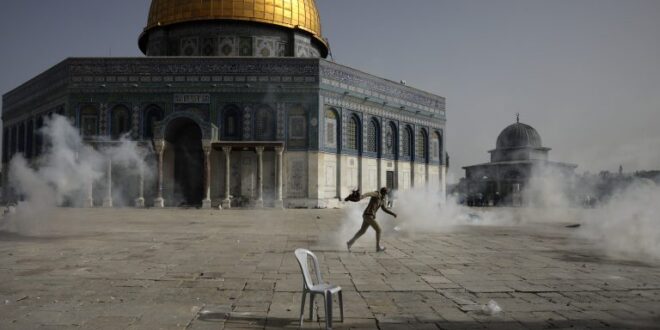 Jerusalem on Edge as Clashes Continue and Situation Escalates Sharply

Fighting between Israelis and Palestinians continued to escalate, with Hamas militants firing rockets into Israel, and the Israelis launching airstrikes in Gaza.

Protests have grown over the pending expulsion of Palestinian families by Israeli settlers from the Sheikh Jarrah neighborhood in East Jerusalem.

The political situation is fraught, with the Palestinian Authority canceling upcoming elections and Israel in the midst of forming a governing coalition.

Continued escalation will further attenuate the U.S. position in the region, offering opportunities to America’s adversaries to wield political influence.

Violent clashes escalated between Israelis and Palestinians this week in Jerusalem. Israeli police entered the Al Aqsa mosque compound – home to the third holiest site in Islam and on the Temple Mount, sacred to Jews, Christians, and Muslims – on the last few days of the holy month of Ramadan. More than 330 Palestinians were injured in the fighting according to a Palestinian Red Cross representative, while Israel reported injuries to at least 21 police officers. Palestinians threw rocks and set off fireworks and Israeli police fired rubber bullets, tear gas, and stun grenades inside the compound. Protests had recently grown over the pending expulsion of Palestinian families from their homes by Israeli settlers in East Jerusalem, claimed by Israel as part of its capital and by the Palestinians as the capital of a future state. Images from the mosque were being shared widely on social media and the looming eviction has contributed to gathering tensions. The Palestinian militant group Hamas threatened “a very heavy price” against Israel if the eviction was not reversed and Israeli security forces not withdrawn from the compound.

In the West Bank, there have been gun battles between Israeli soldiers and Palestinian militants. Yesterday afternoon and into the evening, Hamas militants fired dozens of rockets into Israeli territory, with one landing just west of Jerusalem, damaging homes but not leading to any casualties. An anti-tank missile was also fired from Gaza into Sderot, injuring a civilian in the area, and more rockets were fired into southern Israel. The Israelis responded by launching airstrikes into Gaza, leaving at least 20 Palestinians dead, including at least nine children, according to the Palestinian Health Ministry. These clashes take place against the backdrop of a global pandemic, reports of limited medical support and vaccinations for Palestinians, and a reduction in development assistance through the UN under the previous U.S. administration. That the conflict has erupted during Ramadan only compounds the intensity, leading to concerns about the prospects of a Third Intifada, or uprising. An oped in the Israeli paper Haaretz commented that Ramadan was not a time for a “show of strength” by the Israeli police, noting the heightened potential for a sharp uptick in violence.

Provocative marches by far-right Israelis to commemorate Israel’s victory in the 1967 Arab-Israeli War, also known as the “Six-Day War,” further inflamed tensions, especially when combined with restrictions on Palestinian access to parts of the Old City during Ramadan. The commemoration of this victory is known in Israel as “Jerusalem Day,” and has long served as a flashpoint for violence between Israelis and Palestinians. Some days earlier, far-right Israelis chanted “Death to Arabs” during marches in Jerusalem. The case regarding Palestinians facing eviction in the Sheikh Jarrah neighborhood of East Jerusalem has reached Israel’s Supreme Court, and has become the focus of criticism across the Arab world. Due to the ongoing violence, which has been building for weeks, the Israeli Supreme Court delayed deliberations on the potential expulsion of Palestinian families from Sheikh Jarrah by at least thirty days. Protesters and settlers have repeatedly skirmished, leading to numerous injuries and arrests. The United Nations High Commissioner for Human Rights (UNHCR) recently suggested that the evictions “violate Israel’s obligations under international law.” The current round of fighting is expected to continue, with an Israeli military spokesman noting that Israel is preparing for fighting that could last for several days.

The political situation for both Palestinians and Israelis is fraught. The Palestinian Authority called off elections which were supposed to take place on May 22. The elections would have been the first in 15 years and could have served to provide momentum to the long-stalled political process in the Occupied Palestinian Territories. The Israeli side is also mired in turmoil, with current Prime Minister Benjamin Netanyahu facing charges of corruption. Israel’s President Reuven Rivlin recently tasked centrist party leader Yair Lapid with building a coalition to form a government. The Biden administration has struggled to respond to the escalating violence, although National Security Adviser Jake Sullivan did raise concerns with his Israeli counterpart, Meir Ben Shabbat, about the situation spiraling out of control. For its part, Israel has suggested that the United States is rewarding Palestinian riots by intervening in an attempt to help quell tensions. Still, Washington can hardly be perceived as an honest broker in the conflict, especially after the Trump administration’s unilateral move to bless Israel’s decision to relocate its capital from Tel Aviv to Jerusalem.

The Israeli government looked to characterize the issue as a mere “real estate dispute” between Israeli settlers and Palestinians. But despite attempts to frame this as a parochial issue, there are far-reaching geopolitical implications. The international community has urged calm. The continued violence puts pressure on those countries that signed on to the Abraham Accords, including the United Arab Emirates. Mohammed bin Zayed (MBZ), the Crown Prince of Abu Dhabi, has expressed concern over the violence in east Jerusalem. MBZ also highlighted the sanctity of the al-Aqsa mosque in his call to curb the Israeli onslaught. Other world leaders have also added their voices, including German Foreign Minister Heiko Maas, who lamented further escalation, and UN Secretary General Antonio Guterres, who called for restraint.

On Monday, the Security Council held an emergency session to discuss the violence in East Jerusalem. China, president of the Council for March, was one of the primary authors of a draft statement at the UN Security Council, along with Norway and Tunisia, calling on Israel to “cease settlement activities, demolitions and evictions” in east Jerusalem. The draft goes on to call for restraint and further provocative actions, including “upholding and respecting the historic status quo at holy sites.” A statement from the Middle East Quartet, which includes the United Nations, the European Union, the United States, and Russia, called upon Israeli authorities to “exercise restraint and to avoid measures that would further escalate the situation during this period of Muslim Holy Days.” Continued escalation between the Palestinians and Israelis will further attenuate the U.S. position in the region, and offer opportunities to America’s adversaries, including Beijing and Moscow, to wield increased regional influence. The violence is dominating headlines in the Middle East and broader Muslim world, creating sympathy for the Palestinians and offering an advantage to countries like Iran.