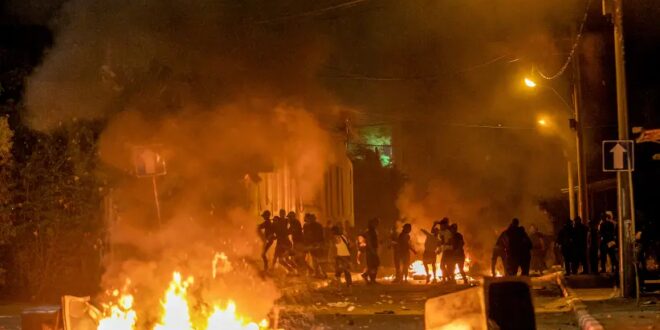 The IDF is registering great achievements in Operation Guardians of the Walls, but meanwhile the house appears to be collapsing from within.

As Israel battles its way through one of the most intense conflicts the country has experienced in recent years, the IDF is pushing how strongly it is striking Gaza and how far it’s setting Hamas back in Operation “Guardians of the Walls.” But while the IDF is standing strong against Hamas, the country is being torn apart by a war from within.

Despite terrorizing residents of southern Israel, as well as those in the center of the country, Hamas has always been perceived as the underdog. As much as it can disrupt daily life in the Jewish state, Israel has always been able to force Hamas and the Palestinian Islamic Jihad into a ceasefire, buying a few months or a few years of relative quiet.

But in this round, no matter how many terrorists or facilities are hit in Gaza, Hamas appeared for the first six days to have the upper hand, sparking chaos on all fronts. It managed to shift the battlefield from the areas within its rocket range to the entire country, with riots shaking all corners of Israel.

This round of fighting seems to have its base in unrest in Jerusalem, with Hamas stressing that it fired a barrage of rockets towards Jerusalem due to planned evictions in the Sheikh Jarrah neighborhood of east Jerusalem and Israeli measures surrounding al-Aqsa.

With economic stress from the coronavirus crisis; ongoing political strife and instability in both Israel and the Palestinian territories; and charged rhetoric by both Jews and Palestinians ahead of Jerusalem Day, the groundwork was set for conflict.

While Hamas has often claimed to be defending Jerusalem against what it claims are aggressive Israeli measures and “Judaization” efforts, this time it succeeded in uniting forces with the West Bank and Arab-Israeli communities. Outrage at perceived Jewish assaults on Jerusalem and al-Aqsa, as well as protests against Israeli actions in Gaza, was blown up and used to spark riots in Jerusalem, Lod and Haifa.

The violence quickly spread to other cities. Arab residents assaulted Jews on the streets and in their homes, burning synagogues and vandalizing large areas.

IMAGES AND testimony from the scenes within Israel brought back images of the 1929 riots against Jews throughout the British Mandate, when Arabs across the region committed pogroms against their Jewish neighbors. Those riots, oddly enough, were also sparked by incitement from Muslim leaders, who used al-Aqsa as their political playing card and quickly escalated due to misinformation and incitement. Jews and Arabs also clashed during the unrest in 1929.
In recent days, Jews and Arabs across Israel have gone out to the streets prepared for violence. Jewish extremist groups called on people across the country to go out and confront any Arabs they came across. Some of these groups also threatened to attack the media.

While these Jewish groups portrayed themselves as protecting Jewish civilians, in many cases they were groups of hooligans simply looking to take out their anger on random Arabs. One case in particular in Bat Yam shook the country, as Jewish youth ripped an Arab passerby out of a car and began to beat him mercilessly.

In Jerusalem and the West Bank, rioters have clashed with security forces on a nightly basis in recent days in support of Gaza.

Along the borders with Lebanon and Jordan, protesters attempted to break through the border fence. In Lebanon, what seemed to be a Palestinian terror group even launched three rockets towards Israel.

ON THURSDAY, Abu Obaida, spokesperson for Hamas’s Izzadin al-Qassam Brigades, expressed the uniqueness of the current situation well, stating: “What distinguishes this battle is the solidarity of our people in all arenas and their clash with the occupation.”

Hamas has achieved what it has called for in statement after statement in recent years: unity through hatred. It has united communities from Lebanon, Jordan, the West Bank and even Israel in fear and in rage against the State of Israel. In the meantime, Israel stands divided, torn by political strife, instability and infighting.

Many government officials responded to the situation by calling for stronger force by Israeli security forces. Amid the deep distrust of the government already present in all parts of Israeli society after two years without a stable government, this likely only fanned the flames.

But there are those attempting to lower the flames. Joint Jewish-Arab demonstrations have called for coexistence and peace. Municipal officials from all sectors released joint statements calling for residents to calm the situation and avoid violence. There are many reasons to hope.

But despite the best efforts of activists, city officials and security forces, violence is still ravaging the streets of Israel. Enraged Arabs and Jews are clashing, with the terms “civil war” and “pogrom” thrown around by civilians living with the uncertainty of an unprecedented situation.

So yes, the IDF is registering great achievements in Operation Guardians of the Walls, but meanwhile the house appears to be collapsing from within. Israel is winning battles for sure, but Hamas seems to be winning the war.

In just a week, Hamas succeeded in igniting a civil conflict between Jews and Arabs within Israeli territory and sparking one of the largest conflicts with Gaza in recent years.

WHILE THE IDF will eventually finish up in Gaza as it always does and the violence in the streets will likely eventually die down, what will be the state of the country? How does Israel move on?

And in the face of these great challenges, what tools will we have?

Israel has gone over two years without a stable government. Incitement and sectarianism have plagued Israel for a long time, and this only intensified during the political and coronavirus crises, as all of Israeli society split, and hostile rhetoric from all sides plagued media and politics as officials attempted to garner favor during four rounds of elections.

Hamas saw the situation and used it to its advantage, taking the anger and hurt already simmering across Israeli society and putting it on a high flame. They may have lit the match, but we certainly had the firewood ready.

But politicians aren’t the only ones to blame. While much of the incitement came from above, the citizens of Israel accepted, justified and helped spread it. It is regular civilians who have gone out in recent days, spread strife and lynched their neighbors.

So, when we look to heal these scars, we cannot just look up: We must also look within. Only the general populace will truly be able to fix the damage this conflict has caused. It will take tremendous efforts by all sides in a Herculean show of unity to bridge the widened gaps. It will demand overcoming extreme fear and distrust. This will demand perhaps the largest civil effort in Israel’s history.

Of course, security forces need to respond to the violence and work intensively to keep the peace, but that must be accompanied with intensive efforts on a civil level to understand how such sectarianism can be combated. A balanced approach must be found or we will simply perpetuate the cycle of violence and push off the actual issues.

This will not happen overnight. Deep wounds have been inflicted in Israeli society this past week that will take months, if not years to heal. Israeli society is perhaps more divided than it ever has been.

But the demonstrations of coexistence that popped up despite the chaos and fear show that it can and must be done. Hamas is winning this war– and this time it will take the general populace, not just the IDF, to tilt the scales and win it back.