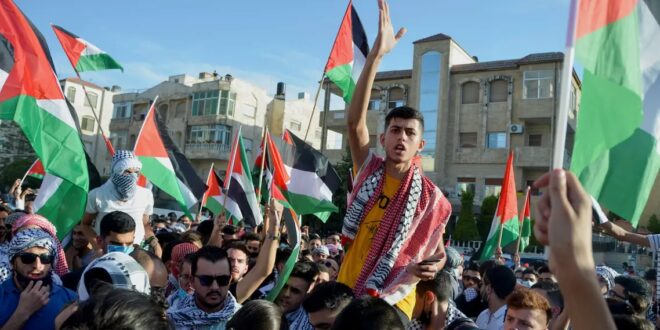 Jordanian lawmakers on Monday unanimously carried a motion urging the government to expel Israel’s ambassador to Amman in protest against Israeli “crimes” against Palestinians.

Speaker of Parliament Abdul Monem Odat announced the move live on television after a parliamentary session devoted to “the situation in Palestine and the crimes committed against them in Jerusalem and Gaza”.

During a six-hour long session, “the expulsion of the Israeli ambassador” was among the key recommendations carried, Odat said.

“We have sent a memorandum to the government to that effect and it is now with the prime minister,” he added.

Prime Minister Bishr Khasawneh, who was present in parliament, said the government will examine all the options “and will rise to the challenge”.

Israel and the Palestinians are mired in their worst clashes in years.

The Jewish state has pounded Gaza in deadly air strikes and with artillery, while the Palestinian enclave’s rulers Hamas have fired thousands of rockets at Israel.

The violence followed clashed between Palestinians and Israeli forces in annexed-east Jerusalem earlier this month at the revered Al-Aqsa mosque compound, sparked by a years-long bid by Jewish settlers to take over Arab homes in the Sheikh Jarrah neighborhood of the city.

Jordan, which is bound by a peace treaty with neighboring Israel agreed in 1994, has for days seen protests in solidarity with the Palestinians.

Around half of Jordan’s 10 million-strong population is of Palestinian origin, including some 2.2 million refugees registered with the United Nations.