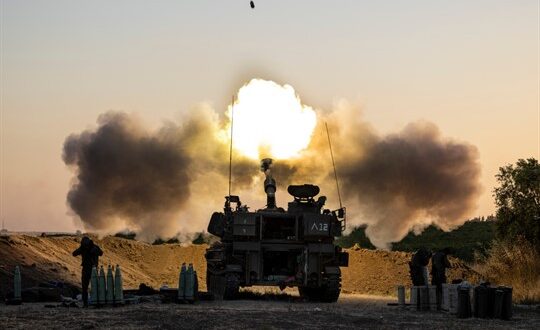 After 11 days of rocket fire and air strikes, a tenuous cease-fire has brought to a close, at least for now, the latest outbreak of violence between the Israeli government and the armed group Hamas in Gaza. As in previous rounds of fighting between them, narratives about which side was to blame and whether either or both were committing war crimes were rampant in media coverage, social media debates and commentary on the conflict.

These narratives included a number of misconceptions about or mischaracterizations of the nature of the conflict as well as of belligerents’ obligations under international law more generally. Three in particular warrant closer examination because of how common and widely shared they have become.

Israel has the right to self-defense. Yes and no. The right of self-defense is typically understood to mean a right exercised by sovereign states to defend their territory from invaders. This right is laid out in Article 51 of the United Nations Charter, which outlaws war between states but allows a state to defend itself if attacked by another state, until such time as the United Nations Security Council acts.

If Palestine is not a state, as both the U.S. and Israel argue, then the concept of self-defense under the U.N. Charter would logically not apply in the same way. Instead, the law on belligerent occupation, which is laid out under the Fourth Geneva Convention, applies. In this case, Israel, as an occupying power, is responsible for maintaining order and security in the territories it occupies. To do so, it may use police measures, such as arrest, detention or trial of individuals who pose a security threat. However, strict limits are placed on how security may be achieved and maintained. Arbitrary violence, torture and mistreatment, as well as destruction of civilian property, are prohibited.

Simultaneously, the occupying power also has responsibilities to inhabitants of the territories under its power, including adequate provision of food, water, medicine and shelter, protection from violence, and respect for fundamental human rights and freedoms. Human rights watchdogs have argued that Israel’s actions toward the Palestinians in Gaza, to the contrary, constitute persecution and apartheid, both crimes against humanity under the 1998 Rome Statute of the International Criminal Court. Occupations are also meant to be short-lived; the idea of occupations enduring for extended periods has been delegitimized by successive U.N. General Assembly resolutions.

Part of what is confusing about the situation in Gaza is that observers do not agree whether Palestine is already a state with rights and responsibilities under the U.N. Charter, or if Hamas should be understood as an armed national liberation movement resisting an occupying power. In many respects, it is simultaneously both. Unfortunately, this allows political actors on both sides to self-servingly use one paradigm to claim rights, while using the other to deny their opponent the reciprocal rights granted by the first.

Palestinians have a right to resist “in every way possible.” So reads the deck of an op-ed by Stanley L. Cohen published in Al-Jazeera, which lays out a legal case for Palestinian insurrection. But this is only partially true. Occupied peoples do have a right of resistance against occupiers under international law, but this does not give them a blank check to engage in crimes against humanity, whether against their own civilians or those of the occupier. The only attacks it justifies are on the military forces of the opponent.

The right to self-determination is well-established in international law, and the Fourth Geneva Convention established the responsibility of occupying powers to end an occupation as quickly as possible. Facing violations of such rules for an extended period, national liberation movements have a right under international law to wage war against a colonial or occupying force, and in doing so they are afforded the protections and legitimacy of international law on international wars. The specific right of national liberation groups to armed struggle to protect their people from persecution or discrimination has also been explicitly endorsed by the international community in Additional Protocol 1 to the Geneva Conventions. However, whether this rule applies in Palestine is the subject of debate, in part because Israel has not signed or ratified Additional Protocol 1, but also because the International Committee of the Red Cross, or ICRC, which serves as the guardian of international law, has not listed this rule among those with the status of customary law, which would make it binding upon all states whether or not they are signatories to it.

For those who recognize or invoke this wider right in Palestine, however, it is important to note that national liberation movements incur a burden of responsibility as well. They are expected to comply with the fundamental rules of war, including directing their attacks at military targets and away from civilians. When they don’t comply with these responsibilities—as Hamas is accused of for firing rockets at Israeli civilian population centers—members of the armed group risk indictment and trial for war crimes. But such breaches do not give the occupier carte blanche to retaliate with collective punishment against civilians, as Israel’s critics accuse it of doing with its air strikes on Gaza. With the International Criminal Court now investigating the situation in Gaza, both Israeli and Hamas violations of war law will be under the microscope.

Israel’s use of force is “disproportionate” because Hamas is outgunned. Israel’s use of force may very well be disproportionate, but not for this reason. The concept of proportionality in the law of armed conflict is not a question of the relative capacity or power of the armed actors. There is no “pick on someone your own size” rule in the laws of war. Rather, proportionality refers to a ratio between the military value of a specific target—say, the Gaza building that housed the offices of Al-Jazeera and the Associated Press—and the expected collateral damage inflicted by the strike.

The laws of war do not specify precisely how military actors are to make such proportionality judgments. However, a foundational principle of the law of war is that of military necessity: The only purpose of military action should be to weaken the enemy sufficiently to achieve a victory. Anything more, such as seeking to crush the enemy, cause superfluous harm or collectively punish nearby civilians, is a breach of war law. Such acts can in fact defeat the purpose of weakening the enemy, because harm to civilians has historically galvanized opposing parties and escalated conflicts.

Consider, in this light, Israel’s argument that it has discharged its responsibility to protect civilians by dropping leaflets, using phone calls or otherwise alerting civilians to an imminent attack. The Military Manual of the Israeli Defense Forces requires such notice to civilians before bombardment to allow time to flee the area, and the IDF follows this rule, which is a right practice under humanitarian law. However, providing prior warning of an attack is not sufficient to relieve Israel of responsibility for harm to civilians and civilian objects from that attack. In an enclosed area with the population density of Gaza, they may have nowhere to flee to. And elderly or disabled civilians, as well as the families who care for them, often cannot flee even if they have somewhere to go. Notification of bombardment does not remove a belligerent’s responsibility to weigh military necessity against expected civilian damage.

Moreover, evacuating civilians from civilian structures, which are normally off-limits, does not by itself transform that structure into a legitimate military objective. According to the ICRC, a protected civilian structure like a school, mosque, hospital or media center can become a military objective only when it is being used to cause direct military harm to the opposing party. Thus, a rocket attack launched from a building might transform that building into a military objective, but the mere suspicion that an armed group may have members inside a building is insufficient. The burden of proof is on the Israeli military to show, for example, that the building housing Al-Jazeera and the AP that it targeted was being used to launch attacks on the Israeli military; that the military value of destroying the building was proportionate to the harm to civilian lives and property; and that the threat could not have been mitigated in another way.

Note that the laws of war also state that in situations of doubt as to whether a structure or object—like a vehicle—is civilian or military, it shall always be presumed to be civilian. This rule, too, is laid out in Additional Protocol 1 of the Geneva Conventions, which, as noted above, Israel has not signed. Nonetheless, Israel is bound to this particular rule, because according to the ICRC it has achieved the status of customary law binding on all states.

This brings us to a final point. Even the protections for civilians that exist under the most generous interpretation of existing international law may fall short of what public opinion finds to be just. This is because, as Giovanni Mantilla argues in his new book, “Lawmaking Under Pressure,” international treaties always represent compromises crafted and codified by states aiming to protect their own interests in future wars. So the agreed-upon rules may fall short of what commentators, observers or war victims would find morally appropriate, and the law—while an important yardstick—may be an imperfect guide to ethical foreign policy where the law is contested, manipulable or incomplete.