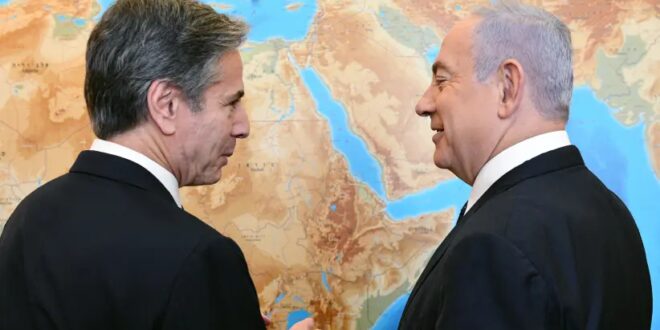 Netanyahu to Blinken: We oppose consulate for Palestinians in Jerusalem

Benjamin Netanyahu said Israel would prefer that a consulate to another entity – the Palestinian Authority – not be on Israeli sovereign territory.

Prime Minister Benjamin Netanyahu informed US Secretary of State Antony Blinken that Israel opposes the reopening of a US consulate for Palestinians in sovereign Israel, hours before the US went public with its plan to do so in Jerusalem.

Netanyahu said Israel would prefer that a consulate to another entity – the Palestinian Authority – not be on Israeli sovereign territory.

Blinken did not specify where in Jerusalem the new consulate would be. Many other countries have consulates or embassies to the Palestinians in east Jerusalem, which is part of Israel under Israeli law but not recognized by most countries, or in Ramallah.

The Trump administration then merged the US consulate for Palestinians, on Jerusalem’s Agron Street, into the US Embassy to Israel in West Jerusalem in March 2019; the move was mostly symbolic as most consulate workers continued doing the work they did before, but under the title of “Palestinian Affairs Unit.”

Blinken said in a press conference on Tuesday night that he is not sure what the time frame will be on reopening the consulate.

“I can tell you that it’s, I think, important to have that platform to be able to more effectively engage not just the Palestinian Authority, but Palestinians from different walks of life, the NGO community, the business community, and others. And so we look forward to doing that,” he stated.

White House Press Secretary Jen Psaki said soon after that reopening the consulate “is an important step in our view, in terms of continuing to rebuild the relationship with the Palestinian leaders that was cut off for several years because of the closure of the consulate, because UNRWA funding was cut off in 2018, and there really wasn’t a method for engaging with Palestinian leaders and others.”

Israeli Ambassador to the US and UN Gilad Erdan said that it is the US’s prerogative to reopen the consulate, but that Israel “indeed expressed clear opposition to reestablishing the consulate on Jerusalem’s municipal territory.”

“It can be in Abu Dis [or] Ramallah,” Erdan told KAN. “The fact that the Americans may have a security concern from opening a consulate for their workers in these places only shows what we’re talking about.”

Erdan also pointed out that opening the PA embassy in Jerusalem contradicts American policy recognizing the city as Israel’s capital, as former US president Donald Trump did in 2018 and Biden said he would not reverse.

Still, Erdan said, “we can disagree with the current government and not every disagreement has to become a crisis. The
fact is that, in the same breath, we are cooperating closely and [Blinken] announced his strong commitment to Israel’s security and replenishing the Iron Dome batteries.”

Erdan said that Netanyahu unequivocally supports US and other international humanitarian aid for Gaza but that his support is nuanced: “We can and must stop a humanitarian crisis, so things that are necessary like water, electricity, medicines or things like that certainly must be allowed, but we must check 100% that it is not reaching Hamas’s hands to be used to rebuild terrorist infrastructure.”

Netanyahu also supports economic projects for Palestinians in the West Bank, Erdan said, but only on the condition that the Palestinians back down from unilateral action against Israel in international organizations.

“When the PA promotes actions against us in the [International Criminal] Court in the Hague or [on Thursday] in the UN Human Rights Council in Geneva, where there is a Palestinian initiative to form a commission of inquiry against Israel, we clarified to the Americans: the two things don’t go together. There won’t be an advanced dialogue with Abbas and the PA as long as they continue to try to harm the State of Israel, its soldiers and its civilians,” he said.

As such, Erdan explained, “we can try to promote economic projects but nothing beyond that, a diplomatic dialogue cannot be advanced in this way.”

Blinken denied that indirect negotiations with Iran to return to the 2015 nuclear deal were close to completion, as
Iranian and Russian officials involved in the talks have said.

“It remains an unanswered question whether Iran is actually prepared to do what it needs to do to come into compliance. The jury is still out,” Blinken told Channel 12 News. “The US and Israel are absolutely united in the proposition that Iran can never acquire a nuclear weapon.”

Blinken said on Tuesday that Iran increased its violations of the Joint Comprehensive Plan of Action (Iran nuclear agreement) as a result of the US leaving the deal in 2018, and that the “time lines have gotten shorter” for the Islamic Republic to enrich and stockpile enough uranium for a bomb.

Erdan, however, said hours earlier that Israel views Iran’s recent violations as a response to Biden campaigning last year on a return to the JCPOA.

Iran is “trying to put pressure, through what we call ‘nuclear extortion,’ to worsen its violations, because it doesn’t see an international military threat,” the ambassador said. “If Iran wants the US to return to the deal so badly, you have to ask, why do they want it? And I’ll answer why: Because in a few years, when the agreement ends, Iran will no longer have to violate it because it will have the legitimacy to have thousands of advanced centrifuges that will allow it to break out to a bomb in a very short time.

Blinken said of his plan to negotiate a “longer and stronger version” of the JCPOA so that the JCPOA’s nuclear restrictions “don’t expire until 2030. If Iran would come back to compliance, we would have some time to extend those deadlines and others.”

Erdan pointed out that Blinken “didn’t say what would happen if the Iranians refuse to talk to them about the deal they want to aim for.”

“We totally believe the US government that it does not want Iran to have the bomb and that would be very bad, but for Israel it’s not just very bad, it’s an existential interest, because we are the ones directly threatened by Iran, and they are the ones building a network of terror organizations around us,” Erdan said.

As such, the ambassador added, “Israel will maintain its freedom to act, to take any step to prevent Iran from acquiring nuclear weapons and no agreement will bind Israel to behave in a way that will tie its hands.”

Blinken also addressed the rising antisemitism in the US, which he called “profoundly disturbing.”

“It’s the canary in the coal mine, it’s almost inevitable when you see antisemitism emerge, hatred of almost other groups is sure to follow. We see that in the US now with hatred directed at Asian-Americans,” he added.

Blinken, who is Jewish and whose stepfather was a Holocaust survivor said: “I feel this at a very personal level, and I also see a warning sign that things are happening that we have to address, because if they are allowed to fester and grow, allowed to go even further with impunity, you wind up having a conflagration that effects a lot of people.”