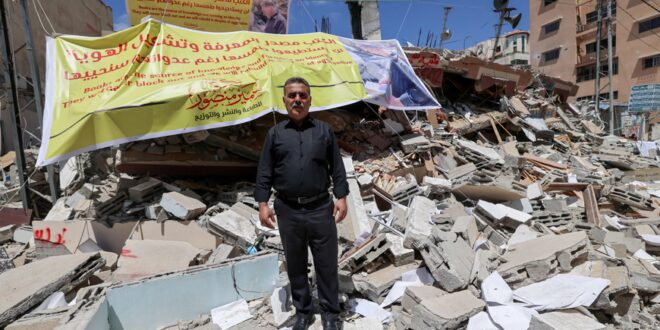 Activists see Israel’s bombing of cultural centers, bookstores and other cultural institutions in the Gaza Strip, as well as the killing of a 17-year-old in a refugee camp in the West Bank, as an attempt to obliterate Palestine’s cultural identity.

On May 17, the Israeli army killed 17-year-old Obaidah Akram Abdel-Rahman Jawabreh, who was shot dead with a bullet to his heart in clashes with Palestinians that erupted in Al-Aroub refugee camp in the southern West Bank along the Hebron-Jerusalem road.

Jawabreh had appeared in a 2019 documentary prepared by the Defense for Children International – Palestine on children imprisoned by Israel. Human rights activists said the killing amounted to a targeting of Palestinian culture and children.

His cousin, Zain Jawabreh, 21, who was very close with the victim, told Al-Monitor, “Obaidah lived with his family at Al-Aroub refugee camp. He was the eldest among his seven siblings. He was a culinary student at Talitha Kumi Community College in Beit Jala, in the southern West Bank. He used to love cooking and swimming. He owned a food store at Al-Aroub camp and helped his father in supporting their family.”

“Obaidah was captured by the Israeli army four times, and imprisoned for a long period of time twice in 2016. In 2015, he was arrested for the first time at the age of 14, and then jailed twice the following year,” Zain Jawabreh added.

Zain Jawabreh said, “In April 2019, he was once again briefly arrested by the Israeli army. He was subjected to physical and psychological torture. Obaidah used to volunteer in cultural and charitable institutions such as the Palestinian Red Crescent and used to teach and raise awareness among Palestinian children.”

Obaidah Jawabreh appeared in the Defense for Children International – Palestine documentary on imprisoned children in Israeli prisons, in which he recounted his experience behind bars. In the film he asked, “Why should Palestinian children be so different from other children in the world? Why do we have to be detained and suffer, while others enjoy doing sports? Why do we lack opportunities and capabilities?”

Obaidah Jawabreh was killed as Israel was pounding the Gaza Strip with shells, destroying several cultural facilities in the besieged enclave.

“What was the goal of destroying libraries or historic buildings? The Israeli army was well aware that these facilities were not a military target,” the novelist added.

The Samir Mansour Library bookstore in Gaza was destroyed in the Israeli shelling. It was one of the oldest and largest publishing houses in Palestine.

“We have lost our cultural sources in the Gaza Strip. We have lost books and cultural institutions and buildings supported by these publishing houses and libraries, such as the book fair, which is held every year,” Joudeh added.

Samir Mansour, 51, the owner of the bookstore and head of the Syndicate of Publishers Union in Gaza, told Al-Monitor, “The bookstore was my soul, my life, one of my offspring. It represented me. I have never imagined that it would be a military target one day. It was one of the largest publishing houses in Palestine. It allowed us to keep track of books and to bring them to light, displaying them in international exhibitions. We used to translate books of several Palestinian writers and creative minds into English.”

“I learned from the news that they bombed the building of the library with a warning missile. When I got there, I saw it collapse before my eyes. The attack on the bookstore serves one goal, which is to obliterate Palestinian culture,” he said.

“But we will remain steadfast and we will revive it. We will be participating in the Cairo International Fair next month. We will make sure to display the books that have been published. Nothing will stop us,” Mansour added.

The Palestinian Ministry of Culture in Ramallah said in a statement May 21, “According to preliminary estimates, the losses in the cultural sector resulting from the Israeli aggression [in the Gaza Strip] stand at $3.4 million.”

The statement said 44 cultural institutions, centers and organizations were affected, with many associated structures demolished or damaged.

The ministry said the destroyed buildings included two cultural centers located near the towers that were bombed; this caused severe damage to art assets, equipment and material. The shelling also destroyed the headquarters of three companies in the publishing and book distribution sector; rented buildings also were hit.

“In addition to material losses, these institutions lost thousands of rare books and documents. This is in addition to 39 organizations [whose facilities] were partially damaged, including two centers inside historical buildings, and 26 institutions that lost equipment and supplies,” the statement added.

The ministry added, “Dozens of artists lost their products and studios, as well as paintings that were damaged.” It said, “There is no accurate data on artists’ individual losses so far. But the cultural sector has been dealt a severe blow in this round of aggression and immediate intervention is necessary to revive it since it constitutes a vital part of the population’s daily life.”

Tahseen Alyan, a researcher at the Al-Haq rights organization in the West Bank, told Al-Monitor, “The killing of civilian children is a flagrant violation of international conventions, the principles and rules of international law, including the international law of armed conflict, and the Fourth Geneva Convention of 1949, as well as the first additional protocol annexed to the Geneva conventions. This supplement regulates the crimes of war according to the provisions of Article 8 of the Statute of the International Criminal Court.”

Alyan said the attack on cultural institutions is also in violation of Article 53 of the First Protocol of the Fourth Geneva Convention, providing for the protection of cultural spaces, and places of worship and historical monuments, “which constitute the cultural and spiritual heritage of peoples.”

Post Views: 113
Previous Is two-state solution back on Israel’s agenda?
Next Israel sets conditions for talks with Palestinians via Egypt