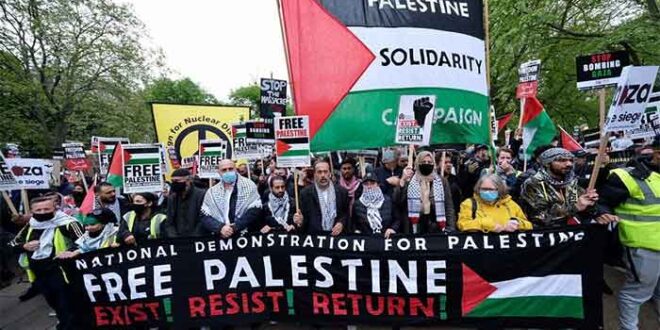 Two historical things have happened recently which have been passed off as non entity because it hurt the business interest of the powerful nations. The UN Human Rights Council adopted a resolution to form an International inquiry commission to investigate, ‘ “grave human rights situation in the Occupied Palestinian Territory, including East Jerusalem” including violation of International laws and treaties, and all underlying root causes of recurrent tensions, instability and protraction of conflict, including systematic discrimination and repression based on national, ethnic, racial or religious identity on or before April 13th, 2021. The Commission shall be appointed by the President of the UN Human Rights Council and it seeks cooperation from all the parties.

The adoption of a resolution also explained and exposed the western hypocrisy on the issue. UK, Germany and Austria and six other countries, were the main proponents of opposing the resolution. Sadly, it was Germany and Austria where Hitler and other Nazis tortured and killed a large number of Jews. Of course, the decisive role that UK played in snatching the Palestinian land to hand over to Israel can not be kept aside.

France, Brazil, Denmark, India, Italy, Japan, Netherlands, South Korea and six other countries (total 14) made them absent during the voting though they participated in the discussion. Now, this is a clever ploy to please all the sides without focussing on the issue of violation of human rights and Israel’s continuous negation of the international laws. It is not possible without open support from the United States, UK, France and Germany. India has joined in this league in recent years as the Sangh Parivar and its ideologues consider Israel a ‘friendly’ country overturning our historical legacy of standing with Palestinian people.

Those who supported the motion were Argentina, Bangladesh, Bolivia, China, Cuba, Indonesia, Mexico, Namibia, Pakistan, Philippines, Russian Federation, Senegal, and Venezuela. In total 24 countries supported the motion. The Muslim countries have been feeling uncomfortable on the issue for long though the dominant among them like Saudi Arabia and other middle eastern countries have made their relationship with Israel stronger and have not been able to get a fair deal for their Palestinian brothers and sisters. It was therefore interesting to see China, Cuba, Russia joining hands with other countries to ensure that Israel is made accountable for all its acts of intimidation and violence against the Palestine people.

For the first time in recent history, Israel has faced this international solidarity though we know it well that the powerful lobby led by the Americans will thwart everything that wishes to bring Israel to follow and respect international laws. American administration under Joe Bidan remains the same as Donald Trump as far as the issue of Israel is concerned but it is good that Russia has decided to speak up against Israel. Let us hope that this resolution will bring hopes in the lives of Palestinian people. The Western world continues to focus on ‘retaliation’ by Hamas but refuses to debate the whole issue of autonomy and sovereignty of Palestine over its territory. The fact is that Israel’s security agencies have been brutal and inhuman while dealing with the Palestinian people particularly those living in Gaza strip.

The western patronisation of Israel has made its government more racist and brutal. It felt that it could do anything at its whims and fancies as any resolution against it was vetoed by the Americans and European nations. European Union has not spoken categorically on the issue but what is more historical is the resolution passed by Irish parliament which has condemned the “de facto annexation” of Palestinian land by Israeli authorities in what it said was the first use of the phrase by a European Union government in relation to Israel as per reported by news agency Reuters. The news agency quoted the Foreign Minister of Ireland as informing the Parliament that, “The scale, pace and strategic nature of Israel’s actions on settlement expansion and the intent behind it have brought us to a point where we need to be honest about what is actually happening on the ground. … It is de facto annexation,” as per Reuters report.

Ireland’s attempt to carve out a niche for itself and come out of the shadow of the United Kingdom is extraordinary. Of course, as a EU nation, it will have to follow EU dictates too but it can open up a new debate in European Union.

When Israel was bombing over innocent children and civilian areas in Gaza Strip the world watched in great outrage though the Hindutva friends in India were bombarding twitter with ‘We love Israel’ ‘Stand with Israel’ or ‘Palestinian terrorists’. Ofcourse, our Permanent representative in the United Nations was condemning violence in Gaza Strip in a very ‘balanced’ presentation. Unfortunately, the Hindu right wing in India love any one that shows Muslims as terrorists or unwanted. Israel for them is a ‘role model’ as it can do things at its ‘whims and fancy’. The Hindutva ideologues and cheerleaders want India to be or behave like Israel. It is also the great ignorance that the Sanghis love and celebrate Hitler and Israel both together.

In India, our leadership, right from Jawahar Lal Nehru till Indira Gandhi have been very pragmatic and supportive of Palestinian struggle for their homeland. Jawahar Lal Nehru always stood with the rights of Palestine and sent Indian forces to the UN Emergency Force to be stationed in Gaza. In 1960, he went to meet Indian troops when returning from an official visit from the UK after participating in the Commonwealth Prime minister’s conference in London. It is also a fact that Israel tried to kill Nehru when the UN mission plane was taking him back to Beirut. Nehru was not on official visit but just stopped over at Beirut, Lebanon from where he was escorted in a UN plane. Israeli air force planes chased his plane but because of great maturity shown by the pilot of the UN plane, he returned safe to Beirut.
We know how the successive government welcomed Palestinian leader Yasser Arafat whenever he travelled to India. India’s policy towards Tibet, Palestine, Namibia and South Africa had been consistent and supportive of the rights of the people to decide about their fate. India was the first one in recognising Palestinian right over their home land as well as that of the black people in Africa. India always supported Palestine freedom since 1947 and recognised Palestinian statehood though relationship with Palestinian Liberation Organisation or PLO and its leader Yasser Arafat started since 1974 and he was given full respect as a ‘head of state’. It is this reason that Arafat always considered Indira Gandhi as his sister and always felt proud of India’s support to the Palestine cause.

Yasser Arafat also participated in the 7th Non-Aligned Movement Summit in Delhi under the chairpersonship of the then prime minister, Mrs Indira Gandhi, in which Cuban President Fidel Castro too participated. On November 19th, 1988, India officially recognised Palestinian statehood and started its foreign mission in Ramallah.

Now, we have a government in Delhi whose followers feel that demand for Palestine is ‘subversive’ and that Israel is doing the best to kill people in Gaza when no sane public in the world would support such mindless violence by Israeli troops. Israel’s own paper Haaretz published photographs of 67 children killed in Gaza due to heavy bombardment by the Israeli troops. The newspaper gave the photographs titled “ The Price of War’. We all know how Israeli forces did not bother even targeting AFP and Aljazeera headquarters based in Gaza Strip. The world watched Israeli terrorism in great horror and the country’s leadership continue to create differences among the communities. It is important for all the nations of the world to not vilify their own citizens who happened to be minorities. The Palestinian or Muslim citizens of Israel face enormous difficulties even in getting a home at safe places. They face serious institutional discrimination and social hatred. Therefore, the issue of Palestine has to be resolved and Israel must be asked to withdraw from Gaza and stop intimidating and killing people at its will. Its leadership must be made accountable to the world. It is surprising and shocking when we see mute western responses to Israel’s blatant violation of Palestine people and the torture its forces inflict on the innocent civilians inside the Palestinian controlled territory. One should not forget how Europeans and America rebuilt Germany after Hitler was defeated. To defeat Nazism, it was a combined effort including the famous Nuremberg trial that brought all those friends and allies of Hitler who was responsible for unleashing violence on its own citizens. But then, Germany and Europe very smartly exported their failure and problem to Palestine. Have you ever heard that the nation Palestine disappeared to give ‘rise’ to a new nation of Israel? Therefore, it is now the duty of the Europeans and America to jointly work for a permanent settlement of Palestine and it will not be possible unless and until Israel’s leadership face the same kind of trials which Hitler’s associate got after his defeat. In the best interest of the Middle East, acceptance of Israel as a nation should be part of the deal but the Palestinians must get their full state and Israel must be stopped from crossing the boundary at its will.

Will the Irish Parliament’s resolution and adoption of UN Human Rights Council’s resolution and formation of an international tribunal compel Israel to ponder over its follies and mistakes in the region? Will the EU and Americans foil anything to censor Israel? Whatever happens, it is extremely important to bring peace in the region which is not possible without Palestine getting its due and Israel respecting that line of control. No one should try to defend brutal killings of innocent citizens including children as well as those reporting from the region. Let us hope good sense will prevail and Israel’s leadership will understand that their adventures have no takers and therefore they will have to respect the sovereignty and autonomy of Palestine. International community has to respond to this as any delay in providing justice to Palestinian people will only harm peace process in the middle east.