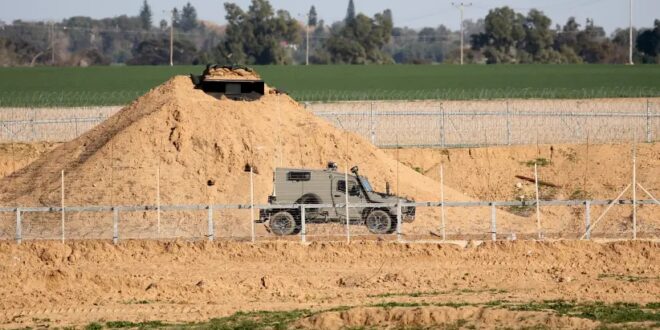 Though the terrorist was neutralized, residents of Yated and the nearby Sde Avraham have been instructed to lock their doors and stay inside while additional forces scan the area.

The terrorist who injured a security patrol member near the Gaza border on Sunday evening was a Palestinian resident of Gaza who crossed into Israel from the southern Gaza Strip, a preliminary report has shown.

The terrorist managed to pass through the Kerem Shalom crossing, bypassing all IDF lines of defense and reached the towns of Hevel Shalom along the Gaza Strip, the local security patrol reported.

However, a military source said on Monday that the terrorist did not sneak past the crossing like previously assumed, but used a breach in the border fence to get in, Walla reported.

An initial IDF investigation revealed that the suspect crossed into Israel from an area where the border fence was damaged by mortar shells during Operation Guardian of the Walls.

The report further revealed that the suspect was not identified during his crossing due to a human error in the observation system.

An earlier IDF investigation revealed traces of his entrance north of Kibbutz Kerem Shalom and a source from the Southern Command claimed that despite the success of Operation Guardian of the Walls, IDF forces have distanced themselves from the border due to security risks, Walla added.

A spokesperson for the Eshkol Regional Council reported on Sunday evening that a terrorist had entered into Israeli territory and stabbed a man near the town of Yated, around 5 kilometers from the Gaza border in southern Israel.
Though the terrorist was neutralized, residents of Yated and the nearby Sde Avraham were instructed to lock their doors and stay inside while additional forces scan the area.

A civilian who noticed the terrorist walking in the direction of the street reported what he saw.

A local security patrol member, referred to as ‘Z,’ arrived at the scene and questioned the suspect when the terrorist proceeded to pull a knife on the patroller, lightly injuring him. The patroller shot back and neutralized the terrorist.

After searching the terrorist’s possessions, the patroller found another knife as well.

“I have no doubt that we could have seen an attack here like the horrific murder in Itamar. ‘Z’ saved lives here and prevented a very large event.,” Nir Shurman, chairman of the local security patrol organization said.

“The [local security patrol organization] is the last line of defense for the residents. Their determination, professionalism and quick response to the events is what makes the difference between a successful event and a bereaved family and fighting in Gaza.”

Religious Zionist Party chairman Bezalel Smotrich responded to the attack on Twitter by warning that the situation would only get worse under a “left-wing government with supporters of terrorism,” adding that such a government “will fall very quickly and we will return to repair the damage.”

Smotrich added that he does not “absolve” Prime Minister Benjamin Netanyahu from being responsible for what he called a “moral decay,” but that he believed it was stupid to think that if Netanyahu wasn’t right-wing enough, then a left-wing government is the solution.

Israel Police and the Shin Bet (Israel Security Agency) have opened an investigation into the attempted terror attack.

Post Views: 87
Previous Marwan Barghouti expected to be part of any prisoner exchange
Next Russia’s Timid Approach to the Israeli-Palestinian Conflict