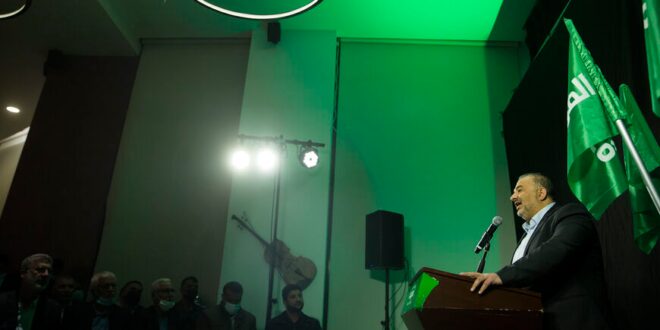 In first for Israel, Arab party speaks with official voice in coalition talks

Whatever the outcome of tonight’s talks on the composition of a new government, Raam head Mansour Abbas had already made history by openly participating in the negotiations for the change coalition.

This article is being penned just hours before the midnight deadline for composing a new government in Israel expires. Yesh Atid leader Yair Lapid has until midnight tonight to inform President Reuven Rivlin whether he succeeded in assembling a majority-backed cabinet. Negotiations continued throughout the night last night at Kfar Hamakabiya hotel, with a few obstacles still unsolved by this morning. Nevertheless, reports claim that the Arab Raam party would get what it demanded in exchange for backing the change bloc coalition. Its demands are largely focused on bettering the lives of Arabs citizens of Israel in terms of development plans and investment.

These hurried negotiations were launched after Yamina leader Naftali Bennett announced May 30 his intention to join a government with Lapid, who holds the mandate to form a government. “There’s unity or fifth elections,” declared Bennett, insisting it was time to stop the political madness in Israel.

Bennett would be sworn in as prime minister, while Lapid would serve as the alternate prime minister. Ironically, the so-called “government of change” will rely on a law passed by associates of Prime Minister Benjamin Netanyahu to allow him to form a government with Benny Gantz of Blue and White. Now it will allow his political rivals to eject him from the prime minister’s seat after 12 years.

Reports from Kfar Hamakabiya highlight disputes over this or that ministry and the disagreement over representation on the judicial appointments committee. Would Ayelet Shaked of Yamina, slated to become interior minister, sit on the committee, or would it be Israeli Labor chair Meirav Michaeli, slated to be transportation minister? But what stands out more is the role of Raam in the negotiations. For the first time in decades an Arab party is fully and openly participating in the political game, with Raam chair Mansour Abbas an equal among equals. The public acknowledgment is very different from what happened after the last election, when Blue and White negotiated secretly with the Joint List, making sure no written documentation of the talks left the room.

This is history in the making. A senior Raam official told Al-Monitor on condition of anonymity, “This is the third night in a row that we are spending in negotiations until the early morning hours.” Abbas himself declared yesterday afternoon upon arriving at Kfar Hamakabiya, “I’m optimistic. The direction is the right one, but we can’t say we’ve done it until it’s done. I will be part of the coalition.”

The main points of the agreement with Raam seem to include chairmanship of the interior committee of the Knesset, freezing or nullifying the Kaminitz law addressing illegal construction mainly in Arab towns and villages, regularizing the unrecognized Bedouin villages in the Negev and an economic plan worth tens of billions of shekels for socioeconomic development and crime reduction in the Arab community. Still under dispute is Raam’s demand for authority within the Interior Ministry for local Arab authorities, a subject that came up at a meeting between Abbas and Shaked May 31.

How are these developments being received in the Arab community among citizens who aren’t politically affiliated with any of the parties? Fauzi Abu Toama, an activist from the town of Baqa al-Gharbiya, told Al-Monitor, “This is a historic moment since the founding of the state in the government’s relations with Arab citizens. The success of this move could be a significant turning point for the future and status of Arab citizens and their integration in the circle of decision-makers.”

Jubran Daeem, a citizen of Iblin who is not at all active politically, said in a conversation with Al-Monitor, “Abbas and his friends in Raam took a considered risk and decided to play an integral part in the political game. Finally, an Arab party decided to quit the backgammon game and move on chess, a move that in retrospect turned out strategically right, which will soon be proven with the powers and achievements Mansour Abbas can gain through the coalition negotiations. This move positions Raam as the leader of the longed-for change, strengthens Abbas’s status as a rising star in Israeli politics and increases his political power in the Arab community in Israel. Even more important than the budget achievements is the achievement of empowering the Arab voice and legitimizing their participation in politics.”

But while Raam is conducting coalition negotiations to form a government, Hadash and Balad of the Joint List each announced that they would oppose a government headed by Bennett. Balad launched a campaign opposing the planned government with the message that there’s no difference between Bennett and Netanyahu and that policy must change, not just the name of the prime minister.

The Joint List was originally composed of four factions: Hadash, Balad, Raam and Taal. Raam left the party several months ago. Thus, with Hadash and Balad each taking positions against a Bennett-led government, it is now up to Taal, headed by Ahmed Tibi and with two mandates, to make up its mind. Tibi has been in direct and continuous contact with Lapid. Analysts estimate that Tibi would rather not leave the entire Israeli political stage to Abbas. If Lapid and Bennett succeed assembling the required majority, Tibi could stall his decision until the last moment, up to the swearing-in of the new government, which could take place next week.

Post Views: 61
Previous How Disastrous Would Disconnection From SWIFT Be for Russia?
Next Iran’s Rouhani says problems with US ‘resolved’ in Vienna talks