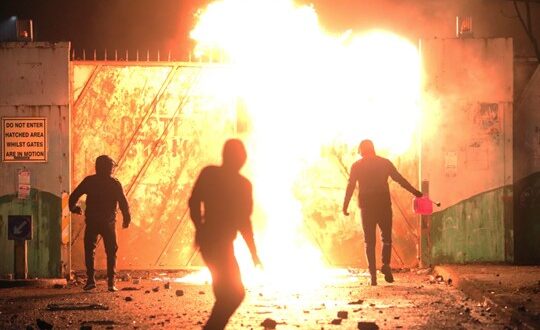 For more than a week earlier this month, Northern Ireland was rocked by riots in pro-British unionist communities, with frequent outbursts of violence in areas bordering on pro-Irish nationalist neighborhoods. Thankfully, no one was killed, but almost 90 police officers were injured in efforts to quell the unrest and keep youths on either side of the “peace walls”—effectively enhanced security barriers separating the two communities—from attacking one another.

The main trigger for the disorder was the recent decision by local authorities not to prosecute leaders of the staunchly nationalist Sinn Fein party for attending the funeral last summer of Bobby Storey, a former Irish Republican Army commander. The decision contravened the spirit, if not the letter, of the law underpinning coronavirus restrictions on mass gatherings, and was thus particularly insulting to the families of those who have died from COVID-19. Unionists were further outraged that Sinn Fein appeared to be acting above a law that it helped create through the party’s role in the regional power-sharing government in Belfast.

Post Views: 73
Previous Brexit Still Hasn’t Solved the Problem of Northern Ireland
Next Brexit’s Finish Line Is Only the ‘End of the Beginning’ for Britain and the EU