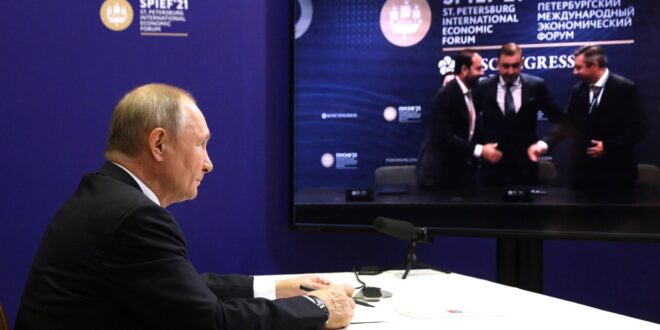 Russian President Vladimir Putin addressed the country’s business and political elite at the St. Petersburg International Economic Forum (SPIEF) Friday, where 5,000 had gathered in his home city for what organizers have hailed as the world’s first post-pandemic event of its kind.

The forum was staged despite Russia recording around 9,000 new coronavirus infections a day amid a sluggish nationwide vaccination campaign. In his speech, Putin reiterated his calls for Russians to take up the jab, said Russia would open its doors to vaccine tourism, criticized rich nations for hoarding extra jabs, and said he was serious about fighting climate change.

Here are the highlights:

— “The highest-income countries, accounting for 16% of population, account for 50% of all vaccines being manufactured now. Hundreds of millions of people simply have no access to the vaccine because their countries have no manufacturing facilities and no funds to buy vaccines. Countries that could help them are providing little to no aid.

— “Until we have secured wide access to vaccines across the world, the virus will be with us, pockets of infection will continue and the threat will be with us.”

— “Sometimes we see absurd politically motivated restrictions on vaccines that have proved their effectiveness and capacity to protect people from the pandemic.”

— “Russia is not just fully covering its own needs. We are also able to provide foreign citizens with a chance to come here and get vaccinated. I know there is widespread demand for that.”

— “In that regard, I would like to ask the government to analyze all aspects of this issue by the end of the month … to be able to organize the conditions for foreign citizens to come to Russia and get vaccinated on a commercial basis.”

— “I would like to say that right now every Russian citizen over 18 can get a vaccine free of charge on a voluntary basis in a comfortable environment.”

— “Let me take this opportunity to urge our citizens to take up this opportunity to protect yourselves and your loved ones. Our vaccine is one of the most effective — with 96% efficacy and no lethal cases have been reported. I felt that for myself. Yes, maybe your temperature will increase a little bit, but that’s it.”

— “I often hear that Russia is not interested in addressing global climate issues. This is nonsense. And in some cases it is a deliberate, blatant twisting of facts. We feel the risks and challenges.”

— “We have whole cities built on permafrost. Should it thaw, imagine the consequences for Russia. We are very concerned about that.”

— “We need to decrease emissions across the economy. Russia can play a role. We have the world’s biggest gas reserves. Of course gas is a fossil fuel, but it’s the cleanest one, and we can’t go without it. We are also building infrastructure for hydrogen production.

— “It’s not enough simply to reduce emissions — we need to take into account the absorption of greenhouse gases.

— “Russia has colossal potential in our forests, tundra, agricultural lands and swamps. Our country accounts for one fifth of the world’s forests. They absorb a few billion tons of carbon dioxide on an annual basis. Thanks to these natural competitive advantages, Russia can take a leading role in the world in the new market for carbon trading … a market which could be worth more than $50 billion a year in revenue.”

— “This is a purely commercial, economic project. Those who believe that this is us trying to bypass other transit players are wrong. The route across the Baltic Sea from Russia to Germany is shorter than if we had to use other countries like Ukraine, Slovakia or Austria. It’s cheaper and shorter to transport gas via this route. The end consumer — utility companies, citizens, business — get gas at cheaper prices than if it had to go through other countries. But the propaganda is still raging.

— “Just two and a half hours ago, the pipe laying was completed for the first line of Nord Stream 2, and works are advancing on the second line. Within a month or two I hope this one will be completed. Gazprom is willing to start supplies, it’s up to the German regulator.”

The end of the pandemic

— “We’re glad that after a long break, Russia is the country hosting the first big international business event. The world is getting back to normal. This conference is a great example of that.”