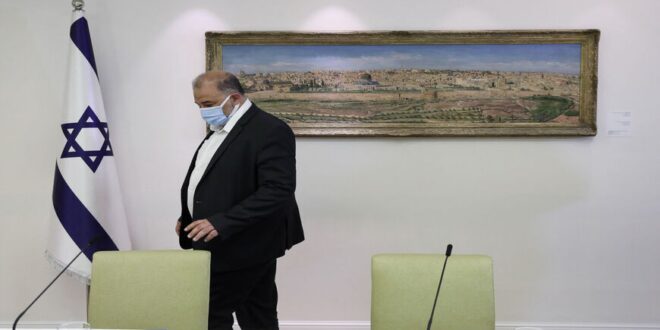 Some Israeli Arabs congratulate Ra’am party head Mansour Abbas for joining the coalition, while others warn he is setting a dangerous precedent in focusing on civil demands only.

Head of Muslim party Ra’am Mansour Abbas participated June 6 in a special meeting that took place at the Dan Tel Aviv Hotel. It was the first meeting of the eight heads of parties to participate in the new government since the announcement last week of its imminent composition. Addressing the journalists who arrived there, Abbas declared, “They won’t break us apart, we are strong.” At the end of the meeting, Meretz Chairman Nitzan Horowitz tweeted, “Change is on the way.”

Evidently, this meeting and all the developments that took place last week are nothing short of historic. Especially the photo of Abbas signing a coalition agreement that would establish a government headed by Yamina Chairman Naftali Bennett, who headed in the past the Yesh Council settlement umbrella organization.

Whatever is the outcome of the Israeli political roller-coaster, Abbas will be able to claim to his voters that he had taken an unprecedented step toward the inclusion of Arab citizens in the circle of decision-makers in the country. Still, his optimism would serve him little if the new government is not established. Clearly, the route to this new government is not going to be smooth.

Prime Minister Benjamin Netanyahu for one does not intend to surrender easily, as he continues to do all he can to thwart the swearing in of the “change government.” This includes allowing a right-wing extremist Jerusalem Day Flag March planned to take place in the Old City June 10, even though this could lead to another bout of violence. Defense Minister Benny Gantz had asked to call it off or change its route, as did several senior police officers. A final decision on the issue has yet to be taken.

Then there is Knesset Speaker Yariv Levin, who is taking his time scheduling the Knesset session to swear in the government. Levin was caught at an open microphone saying to another Likud member, “We have to decide what’s good for us,” i.e., the date of swearing in the new government, which has validated the fear in the political system that the Likud is indeed trying to delay the new government in taking power. These fears have caused the members of the “Change Bloc” to advance moves to replace the Knesset speaker, if the delay continues.

The six members of Knesset from the Arab Joint List have joined this move and added their signatures to the request to replace the Knesset speaker. However, Bennett and New Hope’s Gideon Saar quickly clarified to Lapid that they will replace the speaker the day the government is sworn in, because they refuse to rely on the Joint List.

The truth is that anyone following what is happening in Israel since Yesh Atid leader Yair Lapid announced that he has formed a government cannot remain unmoved by the sight of Likud-sponsored demonstrations in front of the homes of Yamina party members. The demonstrators are hoping to pressure them to change their minds against joining what they deem a dangerous partnership with left-wing parties and with Ra’am.

Much in that spirit, Gilad Sharon, late prime minister Ariel Sharon’s son, declared, “Bennett sold out the Negev for a job.” He was referring to the clause in the coalition agreement over regularizing the status of unrecognized Bedouin villages in the Negev region. Netanyahu quickly adopted this rhetoric of Sharon, tweeting, “Bennet sold the Negev to Ra’am,” and declaring that “all the Knesset members who were elected with right-wing votes have to oppose this dangerous lefty government.”

This is quite a change from Netanyahu’s past positions, when the Likud held continuous talks with Ra’am hoping to win its support for a government headed by the premier. In past years, Transportation Minister Miri Regev (of the Likud) had described Abbas as a terror supporter. Then, when Netanyahu sought Ra’am’s support, Regev changed her position, and was even seen high-fiving Abbas at the Knesset plenum. Now, she is back to her old self, claiming that Bennett will be sitting in a government with supporters of terrorism.

But how is Abbas’ move to join the coalition received among the Arab public? Opinions vary. A senior figure in Ra’am clarified in conversation with Al-Monitor on condition of anonymity, “The responses [in the street] to the move are positive and give us credit, but this is the first step in a long journey to changing the reality that excludes us from the circle of influence.”

Fadi Amun, a student of film, political science and international relations, said in conversation with Al-Monitor regarding the Likud flip-flops on Abbas, “I can sum up the phenomenon as cognitive dissonance on the part of Netanyahu. It used to be said that Netanyahu is a political genius and he is, but this time an Arab from the village [Abbas] put an end to the prime minister’s Wild West treatment of Arab citizens of Israel.”

On the other hand, lawyer Amjad Shoufany told Al-Monitor, “I find it hard to see the achievement of Abbas as described in the press. Regarding the Negev, despite the agreement that hasn’t been publicized yet, I find it hard to believe that they’re giving him [Abbas] something [new] that’s not based on a plan that was offered or proposed earlier by others. This will be Yamina’s defense — that they’re giving him something Netanyahu was already and in any case willing to give.”

Shoufany believes the whole approach of Abbas is risky, cementing the approach that Arab elected officials should concern themselves only with domestic issues and keep away from key national issues and from foreign policy.