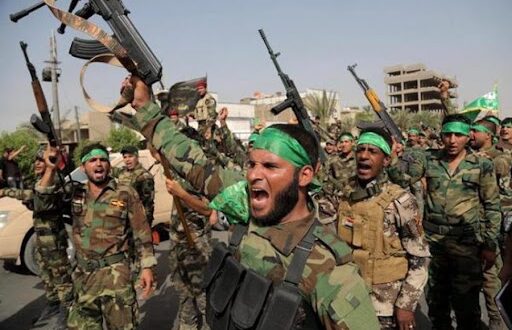 Iranian militias arrested a Damascus regime officer, as well as civilians and several members of the Iraqi “Nujaba” movement, in rural Aleppo.

According to the local website Ain Al-Furat, drivers were arrested at a checkpoint held by Iranian militias in mountainous Azzan, south of Aleppo, for loading cars with ammunition and food boxes.

The report added that the cars had come from the Nujaba militia’s headquarters in the Bakour school near Azzan. A patrol traveled to the location and arrested three Iraqi actors, who were responsible for the caches of weapons.

The patrol went to the military security branch, in the city of Safira, and arrested an accomplice, Mohammed Khair, for participating in theft and smuggling. Khair is responsible for assigning military security actors to smuggle weapons and ammunition in military cargo cars, which belong to the regime, from Aleppo to the Syrian-Lebanese border.

In other news, the son of a collaborator with Iranian militia groups was assassinated in Daraa in southern Syria on Tuesday, May 18. It remains unknown who carried out the assassination.

Unidentified gunmen directly shot Jaafar Zidan al-Ghazali and another victim on the international road between Damascus and Daraa. The assassination killed both victims at the scene, while the unidentified killers managed to escape.

Ghazali is the youngest son of Zidan al-Ghazali, who hails from Qarfa village in the central countryside of Daraa. Ghazali is considered to be Iran’s leading ally in the governorate.

Post Views: 58
Previous The Syrian Badia Returns to the Forefront: Did ISIS Rebuild its Forces?
Next The Great Reset: The Davos playbook for the post-Covid world