Serbia’s Vucic Wants to Control the Montenegrin Govt. It May Backfire

Serbia’s Aleksandar Vucic would do well to learn from the mistake made by Montenegro’s Milo Djukanovic. His quest for absolute power may come back to haunt him.
Once again, the Serbian Orthodox Church, SOC, has been the stage of a ruthless political game by Serbian President Aleksandar Vucic to bring the government of Montenegro under his control.

Earlier this year, the new government in Podgorica and the SOC started negotiations on the signing of a Fundamental Agreement regulating the relationship between the largest religious community in the country and the state.

According to the 2011 census, 72 percent of Montenegrins are Orthodox Christians, out of which a vast majority (regardless of whether they identify as ethnic Serbs or Montenegrins) are followers of the SOC, and a small minority belongs to the canonically unrecognised Montenegrin Orthodox Church.

Successive governments under the control of current President Milo Djukanovic signed similar agreements with smaller religious communities in the country (Catholic, Islamic and Jewish), but not with the SOC, with which it developed an increasingly confrontational relationship in the last decade.

In addition to the question of the Concordat between the Montenegrin state and the SOC, the passing of Amfilohije, the Metropolitan of Montenegro, on October 30, 2020 raised the politically important question of his succession.

In the last week of May, a combined barrage from Serbian tabloids and the Democratic Front – an instrument in Vucic’s attempted hostile takeover of the government in Montenegro – accompanied the visit of Montenegrin Prime Minister Zdravko Krivokapic to Belgrade.

The aim of these attacks was to force a humiliated Krivokapic into signing the Fundamental Agreement with the SOC in Belgrade, under the commanding eye of Vucic (not in Montenegro in the Cetinje Monastery, seat of the SOC in the country). Equally problematic was the fact that the draft text of the agreement had not been seen by the main partners in Montenegro’s ruling coalition of Montenegro, nor discussed with the wider population.

Since the rest of the Montenegrin government would find it extremely difficult to digest the Serbian president’s diktat and an opaque deal, the prospect of the prime minister signing the agreement in Belgrade would most likely have brought down the government.

Additionally, Krivokapic was presented with what was to prove to be a bluff ultimatum: either he signed the agreement in Belgrade or Bishop Joanikije, late Metropolitan Amfilohije’s closest collaborator and a critic of Vucic, would not be elected head of the SOC in Montenegro.

But regardless of his considerable power, the Serbian president was unable to influence the election of the new Metropolitan by the Assembly of Bishops.

Diplomatic slap in the face

Immediately upon landing in Belgrade on the evening of May 27, Krivokapic surprised his domineering Belgrade hosts with a defiant tweet announcing that he had come to Serbia to convey the greetings of Montenegrin believers to the Patriarch of the SOC, Porfirije, support the election of bishop Joanikije, and propose for the Fundamental Agreement to be signed in Montenegro on October 30, 2021, the anniversary of Amfilohije’s passing. He made no mention of Vucic.

Furious at Krivokapic’s diplomatic slap in the face, Vucic’s regime accelerated the smear campaign against the Montenegrin prime minister. Several days later, the leaders of the pro-Serbian Democratic Front announced it would withdraw its support for the Montenegrin government.

In parallel to external displays of unity of the SOC over the election of bishop Joanikije as the new Metropolitan of Montenegro and the Littoral, almost at midnight on May 27 the office of the Serbian Patriarch issued a press release condemning Krivokapic’s “refusal” to sign the agreement.

The purpose of the SOC communication was to sooth the offended ego of the Serbian president, unable to digest the ‘unruliness’ of the Montenegrin prime minister.

Other bishops critical of the Serbian president, such as for example Grigorije, head of the Eparchy of Düsseldorf and all of Germany, were quick to express their empathy towards the government of Montenegro and their decision to postpone the signing of the agreement.

With his ‘No’ to Vucic, Krivokapic demonstrated to the Serbian strongman, to quote a columnist of the Montenegrin daily Vijesti, that “Montenegro is not North Mitrovica, nor Republic of Srpska, nor the 27th electoral unit [of Serbia]”, in reference to two predominantly Serb-dominated regions in Kosovo and Bosnia and the efforts of late Serbian dictator Slobodan Milosevic to de facto annex Montenegro during the 1990s.

Ever since mid-last year, when the editorial board of the pro-Democratic Front portal “in4s” coined the phrase “Serbian world”, referring to the former Yugoslav republics or territories with significant Serbian populations, pro-regime nationalist circles in Belgrade (including some Serbian government ministers) have begun promoting the idea of the unification of the so-called “Serbian world” under the leadership of Vucic.

It is in this context that the Serbian regime aggressively supported the Democratic Front candidates in the crucial local elections in Montenegrin towns of Niksic and Herceg Novi in March and May this year. It is in the spirit of this policy that Vucic criticised Krivokapic’s decision to start the procedure of dismissing cabinet minister Vladimir Leposavic for statements relativising the genocide in Srebrenica.

The Serbian regime’s meddling in Montenegro’s internal affairs over the signing of the Fundamental Agreement with the SOC is the other side of the same coin of the controversial law on Religious Freedom forced through by the former regime of Djukanovic in December 2019. Both provoked the unnecessary and entirely artificial polarisation of Montenegro along ethnic lines.

The law on Religious Freedom was arguably one of Djukanovic’s biggest mistakes. Whoever advised him to push it through was the architect of his downfall. By starting the wave of protests headed by the SOC, the controversial law on religion ended his party’s thirty-year reign over Montenegro.

The battle for control over the “Serbian world” is nothing more than a compulsive quest for absolute power vested in Vucic.

Regardless of the fate of the current Montenegrin government, the latest attempts by official Belgrade to forcefully set the course of events in Montenegro via the instrumentalisation of the SOC may return as a boomerang, threatening to challenge Vucic’s prestige in the rest of the region and ultimately his undisputed rule in Serbia. 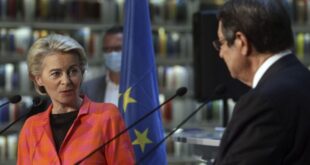 “Europe will never allow parts of our society to be stigmatised: be it because of …