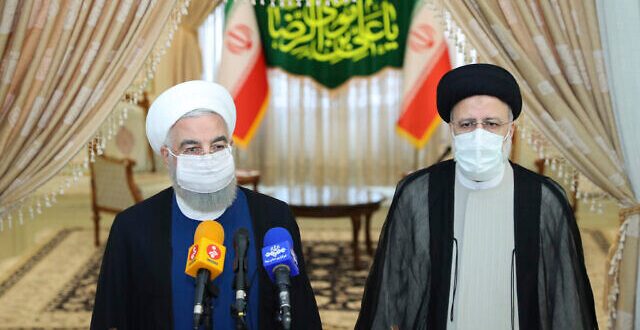 Head of defense panel: Iran’s Raisi will be a ‘big challenge’ for Israel, West

The head of the Knesset’s Foreign Affairs and Defense Committee said Saturday that the election of hardliner Ebrahim Raisi as Iran’s president would present a challenge for both Israel and the West.

“Raisi’s election as Iran’s next president is conclusive evidence of [Supreme Leader Ali] Khamenei’s decision to radicalize Iran’s conduct on foreign, nuclear and terrorist policies,” tweeted Ram Ben-Barak, a former Mossad deputy chief. “A big challenge has been placed at the door of the West and Israel.”

Raisi’s win puts hardliners firmly in control across the Iranian government as negotiations in Vienna continue to try to save a tattered deal meant to limit Iran’s nuclear program.

Tehran is currently enriching uranium at its highest levels ever, though still short of weapons-grade levels.

Tensions remain high between Iran and both the US and Israel, which Tehran accuses of carrying out a series of attacks targeting Iranian nuclear sites as well as assassinating Mohsen Fakhrizadeh, the scientist who created its military atomic program decades earlier.

Israel has additionally long raised concerns about Tehran’s support for terror groups around the world, particularly in Lebanon and Gaza.

Meanwhile, Russian President Vladimir Putin on Saturday was the first world leader to congratulate the Iranian judiciary chief on his victory.

Raisi won the country’s presidential election in a landslide victory Saturday after a panel under the watch of Supreme Leader Ayatollah Ali Khamenei disqualified his strongest competition.

Raisi’s candidacy, and the sense the election served more as a coronation for him, sparked widespread apathy among eligible voters in the Islamic Republic.

The disqualifications affected reformists and those who backed relative moderate president Hassan Rouhani, whose administration both reached the 2015 nuclear deal with world powers and saw it disintegrate three years later with then-US president Donald Trump’s unilateral withdrawal of America from the accord.

Raisi will be the first serving Iranian president sanctioned by the US government even before entering office, over his involvement in the mass execution of political prisoners in 1988, as well as his time as the head of Iran’s internationally criticized judiciary — one of the world’s top executioners.

On Saturday, Amnesty International called for Raisi to be investigated for alleged crimes against humanity.

Raisi will likely serve two four-year terms and thus may be at the helm at what could be one of the most crucial moments for the country in decades — the death of the 82-year-old Khamenei. Already, speculation has mounted that Raisi may himself be a contender for the position, along with Khamenei’s son, Mojtaba.

For his part, Khamenei hailed the results on Saturday as a victory for the nation over “enemy propaganda.”

“The great winner of yesterday’s elections is the Iranian nation because it has risen up once again in the face of the propaganda of the enemy’s mercenary media,” he said.