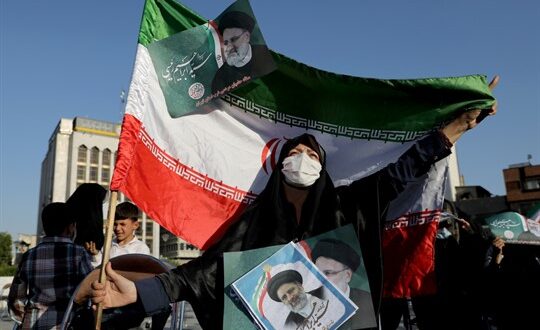 Iranians will go to the polls this Friday to choose the successor to centrist President Hassan Rouhani, who is winding down his second four-year term and cannot run for reelection. The polls will take place in an atmosphere of widespread public apathy, as voters choose from a list of presidential candidates that has been heavily vetted beforehand. Of the seven contenders approved last month by the Guardian Council—an oversight body of 12 clerics who are closely aligned with Supreme Leader Ali Khamenei—five are regarded as hard-liners, while the other two are uncharismatic moderates with relatively low profiles. Ebrahim Raisi, a hard-line jurist, is widely seen as the front-runner.

The reformists, one of the main political blocs in the country’s fluid factional landscape, saw all of their preferred candidates excluded, raising the very real prospect that they could be shut out from the key participatory instrument in Iran’s government for at least the next four years.

The reformists hadn’t counted on the deck being so stacked against them. In a bid to avoid the bitter experience of the 2005 elections, in which multiple candidates split the reformist vote and paved the way to victory for firebrand conservative Mahmoud Ahmadinejad, they sought to create a transparent, democratic consensus-building body that could resolve internal schisms. To that end, the Reform Front, a political alliance comprising dozens of reformist parties and politicians, was formed in January.

The front’s members came up with a list of 14 potential presidential contenders, with the goal of eventually backing a single one. However, their leading candidates quickly ran into a number of problems. Foreign Minister Javad Zarif—who was seen as a potential contender despite his stated preference to stay out of the race—was targeted by a huge smear campaign in state media outlets, accusing him of recklessly trying to revive the 2015 nuclear deal for political gain. Then, in April, a damaging tape was leaked, in which Zarif criticized the Iranian regime for prioritizing the military, especially the powerful Islamic Revolutionary Guards Corp, over diplomacy. Khamenei described Zarif’s remarks as “regretful” and a “repetition of the enemy’s hostile rhetoric,” all but ending a possible presidential run before it even got off the ground. Around the same time, Khamenei dissuaded another promising reformist, Seyed Hassan Khomeini, a prominent grandson of Ruhollah Khomeini, the leader of the 1979 Islamic Revolution, from running. As a result, he didn’t even put himself forward for consideration toward the final list of 14 candidates.

This was all before the official vetting process had even gotten underway. On May 25, the Interior Ministry announced the final list of candidates approved by the Guardian Council, which barred all but seven of the 592 presidential hopefuls who registered. No one from the Reform Front’s list made the cut, and influential moderates from the conservative camp were also excluded, most notably Ali Larijani, the former speaker of parliament and an adviser to Khamenei. This decision, which followed the council’s similarly massive culling of moderate and reformist candidates in last year’s parliamentary elections, sent a clear signal of the regime’s desired political trajectory for the country.

Some progressive reformists, like Mostafa Tajzadeh, a former political prisoner, described this consolidation as an “electoral coup” that aims to lay the groundwork for a potential successor to the 82-year-old Khamenei as supreme leader. Others saw it simply as the continuation of a long-running trend whereby the state’s authoritarian tendencies dominate pro-democracy forces. The Reform Front released a statement in response to the Guardian Council’s decision, declaring that “the main message of this action is to remove the people from the country’s decision-making process.”

Some reformists believe that despite being frozen out of the electoral process, they should exercise their voice by endorsing one of the more moderate, pragmatic candidates left in the race, as they did with Rouhani in 2013. This year, that could be either Mohsen Mehralizadeh, a former vice president who identifies as a reformist but was not selected for the Reform Front’s list of preferred candidates, or Abdolnaser Hemmati, a former head of the Central Bank under Rouhani who, despite being an uninspiring pragmatist, is nonetheless outperforming Mehralizadeh in the polls.

However, there is also a sense in the reformist camp that their alliance with Rouhani was not a successful experience. Despite backing him in both the 2013 and 2017 elections, the reformists’ meager presence in his administration limited their influence, even as they were still associated with Rouhani’s failures. Despite his pledges of economic revival, conditions in the country remain dire—a result of sanctions imposed by the U.S. as part of its “maximum pressure” campaign, as well as domestic mismanagement, corruption and the COVID-19 pandemic. Many Iranians also still remember the brutal crackdown of the historic, nation-wide protests that erupted in November 2019 in opposition to a gas price increase. All of these factors have fueled an unprecedented level of political disillusionment among Iranian society. Senior reformist figures tell me they are unable to persuade those intent on boycotting the elections to instead vote for a compromise candidate. Recent polls indicate turnout in the upcoming election will be around 40 percent, which would be the lowest in the 42-year history of the Islamic Republic.

Given the challenges facing them, Iranian reformists, who still see themselves as working within the system, are divided on how to approach the election. Some of them are planning not to vote at all, but they are reluctant to encourage others to boycott the election, as that would put them in the same category as the dissidents advocating for regime change. A widespread boycott would also all but ensure a victory for Raisi.

For this reason, some, mostly young rank-and-file reformists prefer to rally around Hemmati’s campaign in a bid to prevent a fundamentalist hard-liner from winning the presidency. A hashtag being widely used by Hemmati’s supporters, Nejate Iran or “Rescue Iran,” clearly seeks to tap into this sentiment. The strategy does have a chance of success: If Raisi and the four other hard-line candidates split the conservative vote, there is a possibility that none of them will secure the outright majority required to win in the first round. In such a scenario, Hemmati could emerge as the runner-up and compete in a runoff against Raisi, which could mobilize reformists anew. Still, other reformists believe Hemmati is a “losing horse” and it is too risky to endorse him, unless he shows some capability of creating a popular wave.

For now, the Reform Front’s official position is that it does not have a candidate to recommend to its supporters. However, this passive position could backfire, considering that voters expect politicians to lead and take risks. It’s not hard to imagine a post-election scenario where a hard-line president is running a repressive administration while leading reformists face tough questions about why they didn’t put up more of a fight.

It remains to be seen whether the Reform Front will change its official stance. Ultimately, the hard choices it faces underscore the increasingly narrow political environment in Iran. At best, the reformists will come out of this election as secondary actors in another moderate administration, or at worst, as a mostly powerless strain of opposition against a hard-line government.

Post Views: 22
Previous The Biden Administration’s Iran Policy: All Carrots, No Stick
Next Biden’s Tour of Europe Leaves a Lot of Unfinished Business