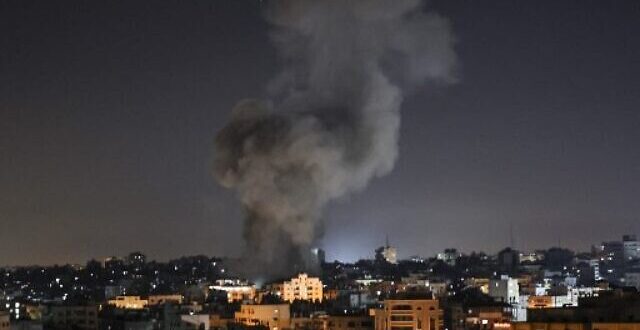 A senior member of Palestinian Islamic Jihad said Saturday that Gaza terror groups have sent a message to Egyptian mediators warning of a violent response if Israel continues to carry out strikes on the Strip in response to balloon-borne attacks that have burned crops and open-land in southern Israel.

Khader Habib told the Al Ayam newspaper that if the retaliatory strikes continue, as well as the blockade on the Strip that Israel says is necessary to prevent terror groups from building up military capabilities, “the [terror] organizations will respond in a similar fashion.”

“We will not allow the Israeli government to impose its conditions on the resistance or isolate Gaza,” Habib said, according to the Kan public broadcaster, adding that the terror groups have already formulated a plan if Israel continues its actions.

Habib additionally warned of potential fighting along the whole Gaza border, despite the calls for restraint by some within the enclave.

Meanwhile, Minister for Regional Cooperation Issawi Frej addressed the matter of Israel’s retaliatory strikes, telling an event in the northern city of Hadera on Saturday that “sometimes there’s no choice.”

The Islamic Jihad threat came a month after an 11-day conflict raged between Israel and Gaza terror groups, with the fragile ceasefire under heavy strain and after the Israel Defense Forces chief ordered the military to prepare for a resumption of fighting.

The warning came amid rising tensions as the IDF launched airstrikes on Hamas targets throughout the enclave on Thursday night in response to ongoing arson attacks.

The strikes were far greater and more forceful than those launched earlier this week in response to similar airborne attacks from the Strip and appeared to be the most significant retaliation by Israel to incendiary balloons in the three years since Palestinian terrorists began using the tactic.

Terrorists in the Strip restarted launching balloons carrying incendiary and explosive devices into southern Israel ahead of a contentious Jewish nationalist flag march in Jerusalem this week. The move was a violation of the fragile ceasefire agreement that began May 2.

Since the fighting between Israel and Gaza terror groups ended last month, Hamas has repeatedly warned that it could restart heavy fighting over developments in Jerusalem.

The balloon-borne attacks also came as Hamas has reportedly been frustrated by delays in receiving the latest installation of monthly aid it receives from Qatar.

The payment of millions of dollars has not been transferred since last month’s Gaza war, with Israel refusing to allow the money into Gaza until the terror group releases two civilians and two bodies of IDF soldiers that it has been holding captive.

Egypt also opposed restarting the Qatari payments, insisting that a new mechanism be used to transfer them to Gaza so that they do not reach Hamas.

Additionally, Palestinian worshipers clashed with Israeli police on the Temple Mount on Friday, amid fears of renewed fighting over the situation in Jerusalem.

Police said the clashes began after Friday afternoon prayers at the holy site in the Old City with a procession of several hundred people, dozens of whom refused to disperse when they arrived at the exit to the compound and began hurling rocks at police.

Nine Palestinians were wounded by officers’ sponge-tipped bullets and stun grenades, and at least one from a stone thrown by the crowd, according to the Palestinian Red Crescent. Three of the wounded were hospitalized, the organization said. Police said they arrested 16 people for throwing stones and rioting.

Palestinian terror groups tied May’s rocket fire from Gaza to unrest in the capital connected to both prayer on the Temple Mount during the Muslim holy month of Ramadan and the pending eviction of a number of Palestinian families from the Sheikh Jarrah neighborhood.

Meanwhile, in the West Bank on Friday, violent clashes erupted between Palestinians and Israeli soldiers near Beita, with at least 47 Palestinians hurt from tear gas inhalation and rubber-tipped bullets, according to the Red Crescent.

The area around Beita has seen repeated clashes between Israeli forces and Palestinians in recent weeks following the reestablishment of the illegal West Bank outpost Evyatar on land close to the town. Palestinians have hurled stones at troops and burned swaths of land, while Israeli soldiers have responded with live bullets and riot dispersal munitions.

Four Palestinians have been killed by Israeli fire in clashes between Beita residents and Israeli forces in recent days.

The land on which Evyatar was reestablished in April historically belonged to the adjacent Palestinian villages of Beita, Kablan and Yitma, though residents have been barred access to it for decades for what the IDF has said were security reasons.