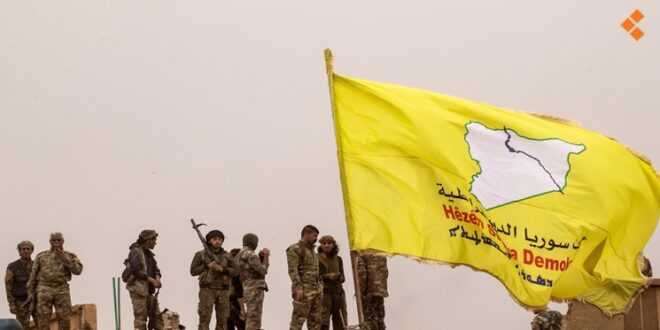 SDF Deceiving Donors to Channel Funds to the PKK

The Syrian Democratic Forces (SDF) continue to deceive their donor organizations. Supposedly, the group is providing for families living in the camps and trying to coordinate with several Western European countries to increase material support. A delegation even visited France and was scheduled to visit several other countries, including the Netherlands, Belgium, Denmark, and Great Britain. It remains unknown however why these visits have been rescheduled or canceled.

Often, the SDF prioritizes ISIS families living in the Al-Hol camp in their dialogue with European delegations that enter Syrian territory illegally. These European visits violate both Syrian and Iraqi laws, as the delegations enter by coordinating with the Government of the Region of the Iraqi Kurdistan, without seeking approval from the federal government in Baghdad. From here, they travel into Syrian territory through the Samalica Crossing to meet with SDF leaders. At present, the SDF is holding a census of children of Swedish nationality who live in the Al-Hol camp, hoping to hand them over to a delegation, with whom they will enter Sweden imminently. The delegation will be made of representatives of the Swedish parliament and government.

SDF has always demanded funding support under various pretexts. The most important pretext is to “house the families of ISIS”, whose home countries refuse to repatriate them. Another pretext is foreign detainees in the SDF’s prisons. Nevertheless, despite the huge financial support that the SDF receive, the group’s leaders — who are linked with the Kurdistan Workers’ Party (PKK) — continue to use the same political tactics to attract financial support, most of which is transferred to the Qandil Mountain, the PKK’s main stronghold. The SDF only spends a small amount of the money received to support the camp; instead, camp residents now rely on “foreign remittances”, which are accessed through the financial transfer offices that the SDF has allowed to operate inside the camp. The transfer offices charge higher fees than those imposed by financial transfer offices licensed by the Syrian government.

Since the SDF seized Raqqa in September 2017, it has periodically received financial and logistical assistance from many countries under the pretext of reconstructing the city. 85 percent of the city’s urban areas were destroyed as a result of the International Coalition’s raids to supposedly fight ISIS.

Sources have confirmed to Athr Press that, despite receiving millions of dollars in support, the SDF has only provided street lights on the outskirts of the city and removed debris from the main streets. At the same time, residents rely on private generators for electricity access and buy drinking water from private tanks.

A special source revealed to Athr Press that the SDF uses the restoration of the Wall of Raqqa, or any archaeological site in the city and its surrounding, as a direct pretext to ask donors for money. In truth, the wall is not severely damaged; moreover, the restoration work has been carried out by using mud bricks — known locally as “laban” — which are not appropriate and do not require large sums of money.

The SDF also uses drinking water in Hassakeh as an excuse for aid, especially after the Turkish occupation forces seized the Aluk water station. In fact, the station provides water for the city and 54 regions and towns. To supplement it, the SDF wants to implement a project to draw water to Hassakeh from the Euphrates. However, this project, largely carried out by the Syrian government, does not contain enough groundwater to meet the city’s needs. It even reached its final stages before 2011, long before SDF’s ongoing project.

Post Views: 47
Previous Putin Did Not Commit to Renewing UN’s Syria Aid Corridor, US Official Says
Next In Raqqa, SDF from Liberator to Occupier