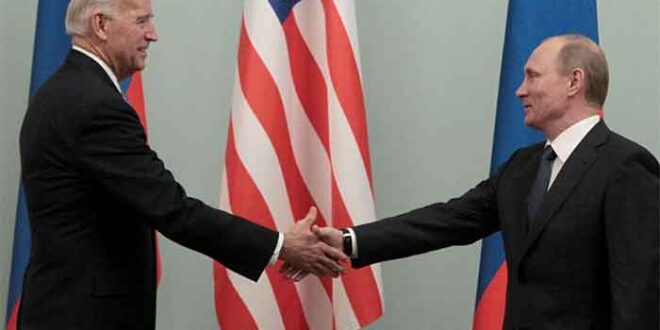 On 16 June 2021, Russian president Vladimir Putin met with US President Joe Biden to discuss the tense bilateral relationship. Despite differences in Russia’s specific bilateral relations with NATO members such as Germany over economic ties and the gas pipeline, or Turkey-Russia strategic relations, to name two examples, Biden presumably spoke as the senior partner of the Atlantic alliance. Judging from the press conferences, the summit meeting was “managerial”, all about managing the US-Russian confrontation, rather than breaking new ground toward détente.

Putting aside Trump-Putin ties, the larger question of the meeting between Biden and Putin is the symbolic significance that politicians, the media, and foreign policy analysts attribute to it. This begs the question whether there is really anything more than public relations to the summit meeting, as much for the West as for Russia and its allies and mostly to calm the world and rally nationalist support in the respective countries.

Other than managing the nuclear arms race and global climate, avoiding accidental escalation of war owing to a third country such as Ukraine, does breathing oxygen into this old Cold War corpse make any sense in the real world where: a) There is no longer a Communist bloc; b) all former Communist countries are well integrated into the capitalist global system; and c) China is a world player with greater economic influence than either Russia or the US.

Granted, the world took notice when Biden called Putin a “killer”. It is true that the world wants nuclear stability and no one wants either Moscow or Washington hovering over the nuclear buttons. However, many rational people realize that heads of state who send police officers and soldiers in the field are indirectly committing murder, regardless of whether they claim to represent a democratic or autocratic state. When it comes to war crimes and human rights observance, there are independent international organizations to determine the degree to which US or Russia is morally superior.

Meanwhile, the US has a long list of sanctions imposed on Russia that have hardly modified its behavior. Those include sanctions following Russian invasion of Ukraine in 2014; cyber-crime and election interference; human rights abuses, trade with Syria, Venezuela and North Korea; and use of energy exports as a coercive political tool. Although Russian trade with the US is less than a quarter in comparison with Russia-China trade, the EU as a bloc is its largest trade partner, accounting for 37.3% of the total, or 175 billion euro. The glaring contradiction between the East-West geopolitical confrontation and relying so heavily as trade partners is indicative of a policy reflecting the world of imperialist rivals before the outbreak of WWI. This model is replicated between the West and China, leaving both Moscow and Beijing to wonder if the purpose of such a strategy is any other than containment to minimize the rivals’ global influence.

The US and many Westerners have argued that we are now in the age of a new type of warfare, namely, cyber-crime targeting major Western corporations and asking great amounts of money in ransom. Perhaps he was bluffing, but Putin has publicly stated that he would hand over cyber-criminals to the US, if there were reciprocity. Needless to point out, the US refuses, considering that US government agencies are most likely involved in “cyber-intrusion” against Russia. At the press conference after the summit meeting, he stated that the US ranks number one in the world in cyber-crime, a charge that Beijing has also made against the US.

Linked to The cyber-crime issue is Russian meddling in the US election of 2016. Once again, Russia has stated publicly that it is will to negotiate, but wants US covert operations to stop in the internal politics of Russia, some of which have been glaring in the last two decades, not just in Russia but former Soviet republics as well. For its part, the US brings up human rights violations, but selectively, excluding anything that touches the US and some of its core allies like Israel and Saudi Arabia.

Ukraine and the Middle East

In 2014, Russia annexed Crimea and the following year intervened in Syria to defeat jihadists trying to overthrow President Assad whom the US wanted toppled with the indirect aid of Saudi Arabia through Turkey. At the same time, Russia has expanded ties with Iran which has indirectly been aiding the Houthi rebels in Yemen in the past decade. These issues fall under the heading of the traditional domain of conflicts within its “spheres of influence”; a 19th century concept about international hegemonic reach. As appalling as it may sound to the US and Europe, Tsarist Russia, the Soviet Union, and today’s Russia always had spheres of influence around its own border for its own security from the other Great Powers.

One must keep in mind that Western wars from Napoleon invading Russia in June 1812, to the Crimean War (1854-56), from WWI to WWII, all Western invasions had the goal of seizing territory at Russia’s expense. A strategic buffer zone like Ukraine may sound absurd to Westerners who see nothing wrong designating NATO as an organization set up to contain both Russia and China. However, it is even more absurd to the Kremlin that the US has a military presence in 80% of the world’s nations, yet, it fears “Russian aggression”.

A political solution was part of the discussion for Ukraine. While the US cannot agree to any concessions on the key question of granting Russia a strategic buffer zone all around its border, most importantly one that includes Eastern Ukraine, the option of armed conflict is also off the table. On the Middle East, there may actually be some diplomatic convergence, largely because Iran wants to be as autonomous as possible with neither US nor Russia having inordinate influence in the Islamic Republic now heavily relying on China as an economic partner. The key is the nuclear deal from which the US withdrew under Trump, but also a possible Russian influence with the civil war in Yemen in which Iran has a role, as well as Afghanistan, Syria, and Iraq, all contested spheres of influence.

The easiest areas to manage will be nuclear weapons and climate. The two sides agreed in February 2021 to a 5-year extension of the New START treaty, placing limits on nuclear warheads and both land and submarine missiles. For Europe and the world, this is good enough, even if all other issues are not worked out. The fact that the two sides had a summit meeting and everyone knows that the old Cold War-style relationship is back on the table in a conventional sense missing during the Trump presidency, satisfying the nationalists and militarists on both sides of the Atlantic, is in itself progress. As long as the two sides manage the nuclear weapons issue, people can sleep easier at night. Détente need not take place, not does it really have to as long as the world knows neither side is preparing for Armageddon. As far as climate, Russia is the world’s 4th largest polluter faced with serious water pollution problems. Last January, it was committed to altering its economic direction toward a new climate-sensitive orientation. There will be convergence on this issue. However, what each side will actually do is entirely another matter.

Does a US-Russia summit meeting today have the same significance as it did during the Nixon-Brezhnev summit of June 1973 as the Viet Nam War was about to end? Why treat US-Russia summits today with the same gravity as though we are living half-a-century ago? The EU has come of age in the last fifty years; the Warsaw Pact does not exist anymore than the USSR and Soviet bloc; China is now the new global economic leader, with the US playing second fiddle while rallying support in the orchestra to contain the Chinese economic dragon whose claws are global. On the day of the Biden-Putin summit, China launched three astronauts to occupy its new space station, a sign that the world’s new superpower is rapidly moving ahead, leaving Russia and the US behind. Meanwhile, the symbolism of the US-Russia summit and the signals it sends to Western defense industries is as significant as the world breathing a sense of relief that the old rivals are managing their chronic confrontation.

The contradiction about the US-NATO Cold War resurgence is not only that there is no USSR, no Soviet bloc, no Warsaw Pact, and China is in fact the new superpower, but that the old Cold War was somewhat easy to justify and carry out given that Russia was largely cut off from the capitalist Western economy. Today, it is well integrated into that economy, legally and illegally partly through money laundering operations, among other state and private enterprises. US pursuit of confrontation at the military level with a capitalist country is not the same as it was when Russia was under one-party Communist state managing an economy largely outside the capitalist world system. The same contradiction holds true in US-China relations, far more significant than the largely anachronistic US-Russia relationship.

Post Views: 72
Previous US accent is on bilateral track to China
Next Negotiators Adjourn Iran Nuclear Talks, Leave For Consultations