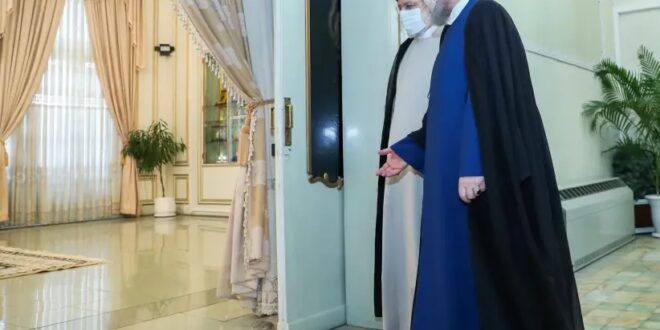 US: Election of Raisi unlikely to change dynamics of nukes talks

Iran’s supreme leader determines Tehran’s policy on important issues, US State Department Spokesperson Ned Price said on Monday, signaling that the election to the presidency of hardliner Ebrahim Raisi won’t change the dynamics of the talks on the nuclear issues between Iran and the world powers in Vienna.

“Iran will have, we expect, the same supreme leader in August as it will have today, as it had before the elections, [and] as it had in 2015 when the JCPOA [Iranian nuclear deal] was consummated for the first time,” Price said.

The timing for the seventh round of talks has not yet been announced, he said, “but I would expect the team will return to Vienna in advance of that.”

“What we’ve been aiming for this entire time, of course, is a mutual return to compliance with the Joint Comprehensive Plan of Action.”

Price’s remarks came as IDF Chief of Staff Lt.-Gen. Aviv Kohavi is in Washington to warn American officials against rejoining the deal and to discuss the threat posed by Tehran’s nuclear program.

“The chief of staff emphasized the shortcomings of the current nuclear agreement, which will allow Iran to make significant progress related to centrifuges as well as to substantially enhance the amount and quality of enriched matter over the next few years, also emphasizing the lack of supervision in terms of nuclear proliferation,” the IDF Spokesperson’s Unit said in a statement.

“The Israelis are in a tough position,” Jonathan Schanzer, VP at the Foundation for Defense of Democracies think tank in Washington, told The Jerusalem Post. “On the one hand, Israel having any hand in the return to this deeply flawed agreement will give the appearance of legitimizing it,” he said.

“The Biden administration might try to tout Israeli input as a way to make the deal appear tougher than it is,” he said. “On the other hand, this is a new government that seeks to make a fresh start with Washington. My understanding is that technical discussions could already have happened at a relatively low level. But that is all. This might improve the deal on the very, very far margins; perhaps not at all.”

RAISI’S ELECTION changes the US administration’s immediate calculus, according to Naysan Rafati, the Iran senior analyst at the International Crisis Group. His research is focused on the Iran nuclear deal and the Islamic Republic’s regional policies. “They’ve made a decision to negotiate on the basis of mutual compliance with the 2015 agreement as a means of stopping and reversing Tehran’s nuclear advances,” he said.

Prime Minister Naftali Bennett said at Sunday’s cabinet meeting that “Raisi’s election is, I would say, the last chance for world powers to wake up before returning to the nuclear agreement, and understand who they are doing business with.”

“Both former-prime minister [Benjamin] Netanyahu and Prime Minister Bennett have been quite clear in saying they think this is a bad move and that Israel will act as it sees necessary,” said Rafati. “But it’s quite possible that the Israeli government would underscore to Washington that if the JCPOA really is the way they want to proceed, then it should be done in a way as to maximize the non-proliferation restrictions on Iran and minimize the sanctions relief it gets in return.

“That means pressing for the greatest degree of monitoring and verification; pushing for the IAEA [International Atomic Energy Agency] to get clarity on safeguard concerns; and rolling back Tehran’s stockpiles and enrichment capabilities as far as possible – and in tandem, working with Washington on intelligence sharing and addressing the non-nuclear concerns shared by both Washington and Jerusalem,” he said.

AMBASSADOR Dennis Ross, a distinguished fellow at The Washington Institute for Near East Policy, told the Post that “the issue is not whether the JCPOA will change; the point is working with the administration on what is going to happen between now and 2030 when the real sunset provisions and limitations on the size of the Iranian nuclear infrastructure are all lifted.”

“What must we agree is a threshold we will not allow the Iranians to cross? Iran should not be allowed to have a threshold nuclear weapons capability. Israel should seek a common definition of that,” Ross said. “The time to start those conversations about what goes into an agreement – and what happens if there is not agreement – is now.”
James Acton is co-director of the Nuclear Policy Program at the Carnegie Endowment for International Peace. He told the Post that “it is not possible to change the JCPOA’s core requirements in response to Israel’s or any other state’s concerns.”

“I wouldn’t be surprised, however, if the United States offered Israel some private assurances, relating to implementation in particular,” Acton said. “I think most US policymakers have concluded that Israel would oppose any agreement with Iran, irrespective of its terms, which has likely weakened Israel’s ability to influence any negotiations.”

ACCORDING TO Suzanne Maloney, vice president and director of the Foreign Policy program at the Brookings Institution, the Biden administration’s posture toward the nuclear agreement is not particularly malleable at this stage.

That may change if the negotiations become bogged down, but for now, I think the calculation is simply that any constraints on Iran’s nuclear progress are better than none,” she said.

“It’s not a calculation borne of any serious conviction that the Islamic Republic can be rehabilitated, as some within the Obama administration were prone to hope. Instead, it’s an objective driven by the demands of the moment, when managing the strategic competition with China and Russia, as well as the implications and aftereffects of the pandemic, far outweigh American ambitions in the Middle East. A resuscitation of the JCPOA is necessitated by the fact that it would enable the administration to focus on more urgent threats and priorities,” Maloney explained.

“I don’t think Iran’s election of a hardline new president, with a reprehensible history of human rights abuses, will change that calculation either,” she added. “With only a few brief exceptions, every American president – Republican as well as Democratic – has sought to negotiate with Iran as a means of moderating or curtailing its most dangerous policies.”

“Personally, though, I remain skeptical,” Maloney said. “A revived nuclear deal will certainly not pay the dividends that were originally envisaged, and it may not provide much of a cushion against Iran’s nuclear ambitions. The timeline is now much more compressed, the putative benefits of the restrictions are offset by the gains Tehran has achieved during the Trump-era hiatus, and the implementation of any rehabbed JCPOA is almost certain to be far more contentious than it was the first time around.”

She went on to say that “there will be absolutely no prospect of any additional concessions from Tehran or modulation of its approach to the region or the world. So it’s a less attractive arrangement than originally intended, and probably less durable than the current negotiators appreciate.

“So the real question for the administration is not whether the deal can be revived – it seems reasonably likely that it can – nor whether the deal can prove [to be] the launching point for additional talks with Iran, which are highly unlikely,” the institution’s director said. “Instead, where I would press the Biden administration is around its strategy for deterring and containing an Iran that is flush with sanctions relief.

“Is Washington prepared to push back on Iran’s orchestration of violent destabilization through its militia forces across the region? Can the US mobilize multilateral opposition to Tehran’s abuse of its own citizenry, just as it did around the nuclear threat? And how will the US prepare for the inevitable crises that erupt over the implementation of a revived JCPOA, especially as we approach crucial milestones and sunset clauses over the next few years?” she asked.

“Both the proponents and opponents of the JCPOA have made it the beginning and the end of Iran policy – [but] that need not be the case.”