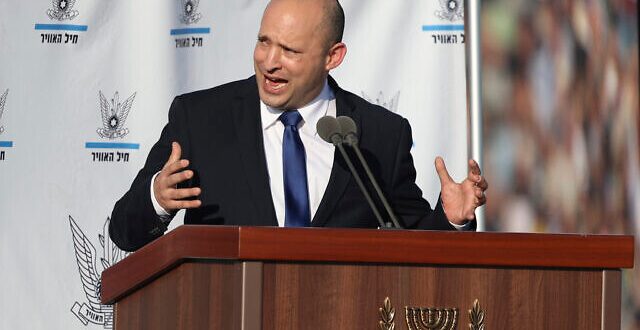 In one of his first speeches as PM, leader says that while Israel will defend itself, it will also work with allies to block an Iranian bomb, breaking from Netanyahu’s policy

Prime Minister Naftali Bennett appeared to hint at Israel’s role in a recent attack on an Iranian nuclear site during a speech at a graduation ceremony for Israeli Air Force pilots on Thursday.

“Our enemies know — not from statements, but from actions — that we are much more determined and much more clever, and that we do not hesitate to act when it is needed,” Bennett said in his speech at the IAF’s Hatzerim Air Base, outside Beersheba.

His remarks came a day after an alleged drone attack on an Iranian centrifuge production facility outside Tehran, which reportedly damaged the site.

In his speech, one of his first since taking over as premier earlier this month, Bennett referred to Israel’s strike on Iraq’s nuclear reactor nearly 40 years ago.

The attack — dubbed Operation Opera — was the first implementation of what has become known as the Begin Doctrine, named for then-prime minister Menachem Begin, which favors taking military action — unilaterally, if necessary — in order to prevent enemy countries in the Middle East from obtaining nuclear weapons.

Bennett said Israel’s prime ministers have always had a “sacred responsibility not to allow an existential threat to the State of Israel. Then it was Iraq, today it is Iran.”

Speaking at the same event, Defense Minister Benny Gantz also discussed Iran’s nuclear program, threatening to conduct a military strike against it if necessary, as Israel did in the case of Iraq in 1981.

“As though no time has passed, today in Iran — as it was 40 years ago [in Iraq] — a murderous and dangerous enemy, which is building arms of terror around the State of Israel, seeks to acquire a nuclear weapon to threaten Israel and the stability of the entire region,” Gantz said.

In his remarks, the prime minister indicated that Israel was breaking from the policy of his predecessor, Benjamin Netanyahu, of refusing to engage with the United States about its plan to rejoin the 2015 Iran nuclear deal. The previous Israeli government effectively refused to discuss the matter with the US except to express its profound opposition to the move.

Bennett, however, said that while Israel would ultimately defend itself if necessary, Jerusalem would cooperate with US President Joe Biden’s administration on the issue.

“We would prefer it if the world knew that a brutal and fanatical regime like this… that is willing to starve its people for years in order to fulfill its military nuclear program, that this is a regime that you can’t make deals with. Unfortunately, that is not the case,” he said.

“We will continue to consult with our allies, to convince, to speak, to share information and understandings, out of deep mutual respect. But at the end of the day, the responsibility for our destiny will remain in our hands and in no other’s. We will act responsibly and carefully,” Bennett said.

Gantz also said Israel was cooperating with the US on the Iranian nuclear issue, and similarly reserved the right to take action against Tehran.

“We are in contact with our American allies in order to ensure the security of Israel. If needed, we will act as we have always acted. We will remove and prevent any threat, with stratagems, with initiative and — of course — with professional and diplomatic responsibility,” Gantz said.

Wednesday’s drone attack reportedly hit the Iran Centrifuge Technology Company, or TESA, in the city of Karaj, northwest of Tehran.

The TESA factory was tasked with replacing the damaged centrifuges at Natanz and also produces more advanced centrifuges that can more quickly enrich uranium, according to a New York Times report on Thursday.

Tehran has sought to downplay the attack, saying that it had not succeeded, despite contrary reports by Iranian opposition sources. Iran has also not identified who it believes was responsible for the drone strike. The country has accused Israel of similar attacks on its nuclear program in the past.

A small quadcopter drone was used in the attack on TESA, the report said, citing an Iranian source who was not identified.

The drone was apparently launched from within Iran, not far from the site, and succeeded in hitting the target, according to the Iranian source familiar with the incident, the report said. However, the source did not know if it caused any damage.

The centrifuge production site was reportedly on a list of targets that Israel presented to the Trump administration last year, at the same time as it suggested striking Iran’s uranium enrichment site at Natanz and assassinating Mohsen Fakhrizadeh, a scientist who began the country’s military nuclear program decades earlier, an intelligence source told the New York Times.

Fakhrizadeh was killed in November 2020 in an attack Iran blamed on Israel, while a mysterious explosion damaged a large number of centrifuges at the Natanz plant in April 2021. Former Mossad spy agency chief Yossi Cohen all but confirmed that Israel was behind these attacks in an interview earlier this month, given shortly after he left office.

The intelligence source said that Israel’s campaign against Iran’s nuclear program had the blessing of the Trump administration.

While Iran maintains that the Karaj facility is used for civilian purposes, it has been subjected to United Nations, European Union and American sanctions since at least 2007 for being involved in Iran’s nuclear and ballistic missile programs. The US lifted those sanctions under the 2015 nuclear deal, but then reimposed them in 2018, when Trump unilaterally withdrew from the accord.

The attack came as the US and Iran — through intermediaries — were negotiating a mutual return to the 2015 nuclear deal, known formally as the Joint Comprehensive Plan of Action. When Trump abrogated the agreement in 2018, he put in place crushing sanctions, which prompted Iran to also abandon the accord a year later, enriching more uranium and at greater levels of purity than was permitted under the deal, as well as taking part in other forms of proscribed nuclear research.

Iran’s uranium enrichment is a key talking point at negotiations in Vienna to revive the deal.

In an apparent effort to ramp up pressure during these negotiations, Iran in April boosted its uranium enrichment to 60% purity, bringing it closer to the 90% purity threshold for full military use, and shortens its potential “breakout time” to build an atomic bomb — a goal the Islamic Republic denies.

Iran has always denied seeking a nuclear weapon, but as it dropped its commitments to the deal it began enriching uranium to levels that the International Atomic Energy Agency said are only sought by countries aiming to build a weapon.