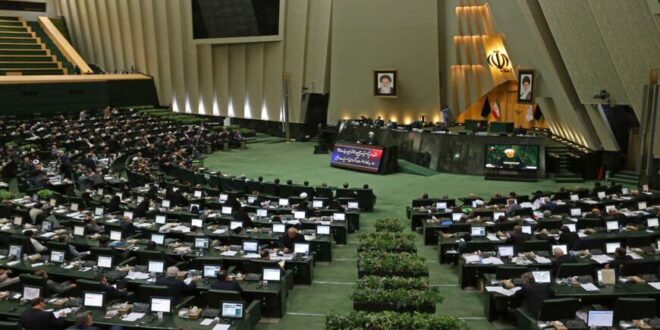 Iran’s Rouhani blames hard-liners for deadlock with US

The statement was yet another sign of frustration from the outgoing president, who has found hard-liners closing windows on a deal between his government and the United States.

Iran’s President Hassan Rouhani blamed “parliamentary bureaucracy” for the delay in the lifting of US sanctions that have almost brought the Iranian economy to its knees over the course of the past three years.

“My government has done the job with regard to the sanctions removal, [but] we are kept waiting by this or that parliamentary committee,” he declared at an oil project inauguration ceremony on June 24.

The comments were made in reference to the parliament packed with his critics. The legislature has gone to extreme lengths to complicate any agreement between the Rouhani government and major world powers on reviving the Iran nuclear deal, formally known as the Joint Comprehensive Plan of Action (JCPOA).

Back in December, the parliament imposed the biggest brake on Rouhani’s path toward the JPCOA revival through a bill characterized by breaches, strict deadlines and nearly impossible conditions for the American side. The bill threw the rift between the administration and the relentless lawmakers into the public sphere, as the president locked horns with the parliament speaker. Yet Rouhani had to swallow the bitter pill by implementing the law.

Only on Wednesday, Rouhani once again expressed his fury and disappointment as he lamented lack of authority for Abbas Araghchi, the top Iranian nuclear negotiator. “He (Araghchi) could finalize the deal as soon as today,” Rouhani complained about the hard-liners’ attempts to postpone an agreement.

In the past three months, the Iranian negotiating team has been shuttling between Tehran and Vienna to speed up an agreement on reviving the JCPOA, from which former US President Donald Trump walked out in May 2018. The Joe Biden administration is now indirectly involved in the talks between Iran and the other five parties known as the P4+1 group of countries, or Russia, China, the UK, France and Germany.

Rouhani and members of his administration have on various occasions signaled optimism toward a deal on the immediate horizon. In the latest, Rouhani’s influential chief of staff, Mahmoud Vaezi, said an agreement had been reached on the sticking point in the negotiations, namely the lifting of sanctions against individuals and entities linked to the office of Supreme Leader Ayatollah Ali Khamenei. Vaezi also appeared confident that the deal has already seen all economic sanctions fully disappear, including the ones targeting Iran’s oil industry, shipping and banking. The statement, however, has been denied by Washington. While suggesting a draft might have already been made, an anonymous state department official noted there is no such deal until all issues are resolved.

The Vienna talks have now been adjourned for further consultations by the negotiators with their capitals. To Rouhani, a revived JCPOA is the key goal to pursue in the coming 40 days before he bids farewell to an office that will be taken by hard-liner Ebrahim Raisi.

The new Iranian president has issued a flat “no” to direct talks with his American counterpart. Yet he has nodded to pursuing the ongoing talks, albeit in his own style. Raisi won by an easy landslide last week following a race against toothless contenders handpicked by the powerful Guardian Council in control of hard-liners.

In the run-up to the election marred by the lowest turnout in the Islamic Republic’s history, the cleric centralized his campaign on fixing the economy and improving the public livelihood squeezed by US sanctions.

The new president and the hard-liners behind him do seem to have recognized the potential contribution of a sanctions-free economy to his public standing. In the partisan battle for sanctions removal, they appear to be locked and loaded to prevent Rouhani from gaining such credit.