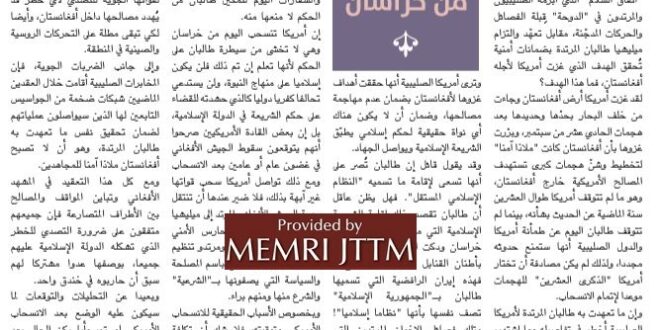 Issue 291 of Al-Naba’, the weekly newspaper of the Islamic State (ISIS), published[1] on June 17, 2021, included an editorial alleging that the Taliban “apostates” are no longer a threat to “Crusader” America and noting that they have become “the security guard” that protects American interests by fighting the mujahideen in Afghanistan. The editorial also stated that the Taliban has no interest in applying shari’a and continuing jihad, accusing the “apostate” group of fighting with America against the Islamic State. The editorial concluded by praising the escalation of attacks by its fighters in various areas in Afghanistan as they continue to wage their jihad.

The editorial, titled “The American Withdrawal From Khurasan [Afghanistan],” began by saying that “Crusader” America announced that it had carried out more than 50 percent of the withdrawal of its troops from Afghanistan according to the “peace agreement” signed between the “Crusaders” and the “apostates” in Doha, which is “the Mecca of the domesticated factions and movements.” In return for the American withdrawal, the editorial added, “the apostate Taliban militia” has pledged and committed to security guarantees that would achieve the objective for which America invaded Afghanistan.

Concerning that objective, the editorial said that America justified its invasion of Afghanistan following the September 11 attacks in 2001 by saying that Afghanistan is a “safe haven” for plotting and carrying out major attacks targeting U.S. interests outside of Afghanistan. “Over the past 20 years, American has not stopped talking about that matter, while the Taliban today has not stopped reassuring the United States and the Crusader countries that it will prevent this from happening once again. For this reason, it was no coincidence that the U.S. is choosing the 20th anniversary of the [9/11] attacks to complete its withdrawal [from Afghanistan].”

Denouncing the Taliban’s pledges to the U.S. in the Doha agreement, the editorial state that what the Taliban has pledged to the U.S. “is more dangerous in its details than what is publicly known.” The editorial noted that in addition to the Taliban pledge not to “allow any individual or group to threaten the security and stability of America and its allies” and its commitment that whoever does that “will has no place in Afghanistan,” the Taliban pledged to “prevent them [those who threaten U.S. interests] from recruiting, training, or collecting donations and aid” and agreed that it will also will not issue any visas, passports, or travel documents to enter Afghanistan to anyone threatening U.S. security.” The editorial went on to say: “Here we notice that the terms of the agreement assume that the Taliban will reach power and will be able to control travel and transit affairs, which means that it will either form a government or be part of a government, yet the U.S. signed the agreement. This affirms that not only did the militia’s ascension to power not pose a threat to America; it was actually in America’s interest.”

The editorial further noted that the U.S. has achieved its objectives behind invading Afghanistan that include ensuring that its interests are not targeted and that “there will be no real nucleus for an Islamic rule that would implement Islamic shari’a and continue jihad.”

Responding to claims that the Taliban seeks to establish what they call “the independent Islamic system,” the editorial wondered: “Will a reasonable person think that the Taliban means by that establishing Islamic shari’a, due to which the U.S. has invaded Khurasan and bombed Iraq, Syria, and [Libya’s] Sirte with tons of bombs and the mothers of missiles?!”The editorial then denounced the Taliban’s description of Iran as “the Islamic Republic,” saying: “Does the rafidi [a derogatory for Shi’ite] Iran, which the Taliban calls ‘the Islamic Republic,’ describes itself as an ‘Islamic system!'” It also said that the “apostate” Muslim Brotherhood factions which have assumed power in some countries call themselves “Islamic governments” and that the “tyrant” Saudi rulers also call their rule “Islamic rule.” The editorial continued: “The Taliban’s ascension to power means its commitment to all the charters and the outcomes of the peace process in ‘Doha.’ Is there anything in the ‘Doha’ agreements other than believing in democracy?!”

Denouncing the notion that the Taliban seeks to establish shari’a, the editorial said that America did not sign the agreement with the Taliban until it had ensured that its interests are achieved. “Is the establishment of the rule of Islam among the American interests?” the editorial asked.

On the U.S. withdrawal from Afghanistan, the editorial stated: “America is withdrawing from Khurasan today, and it is not afraid of the Taliban taking over the government, because it knows that if this takes place, it will not be Islamic according to the prophetic methodology. It will form an infidel international coalition like the one it mobilized to eradicate shari’a rule in the Islamic State.” The editorial further noted that although some U.S. commanders predicted the downfall of the Afghan army within a year or two after the U.S. withdrawal, the U.S. continues withdrawing its troops from Afghanistan and is indifferent about that possibility. The editorial added that America does not mind if the Taliban assumes the mission of the Afghan military, “making it the security guard of the interests of America and its allies.” Hinting at the ties between the Taliban and Al-Qaeda, the editorial stated: “The apostates of Al-Qaeda are ready to patch things up in the name of interests and politics, which they describe as ‘legitimacy.'”

Discussing the real reasons for the American withdrawal from Afghanistan and its timing, the editorial attributed them to the heavy cost and losses of the long war, as mentioned by the “new American tyrant” Joe Biden. The editorial added that among the reasons that led to the withdrawal is “the expansion and spread of jihad, led by Islamic State, in various areas of the world, which scattered the Crusaders’ efforts in their war against Islam,” as admitted by Biden when he mentioned how terrorist threats become more complex and widespread all over the world in Syria, Iraq, Africa, and Asia and deemed it irrational to concentrate U.S. troops in Afghanistan.

The editorial highlighted U.S. commanders’ remarks that American troops will be repositioned at alternative bases and that new bases will be established in nearby countries like the Gulf region to launch airstrikes to counter any danger that might threaten U.S. interests inside Afghanistan and monitor Russian and Chinese moves in the region. Beside its airstrikes, the editorial claimed, the “Crusader intelligence” has established over the past two decades a massive network of spies to ensure that the Taliban would fulfill its pledge not to make Afghanistan a safe haven for the mujahideen.

Suggesting that the Taliban and the U.S. are collaborating to fight the Islamic State, the editorial asserted: “With all this complexity in the Afghan scene and the divergence of positions and interests between the conflicting parties, all of them agree on the need to confront the danger the Islamic State poses to all of them, as a common enemy that they have previously fought in one trench.”

The editorial said that regardless of analyses and predictions as to what the situation would be like after the U.S. withdrawal from Afghanistan, ISIS soldiers continue their jihad, according to the prophetic methodology, not being harmed by those who let them down or oppose them. It also noted the increasing attacks of ISIS fighters against “unbelievers and apostates” in Kabul, Nangarhar, Baghlan, Parwan, and others areas.

The editorial concluded by asking Allah to reward “the lions of the caliphate in Khurasan” who stood firm in during adversity and escalated their attacks as they continued waging their jihad.